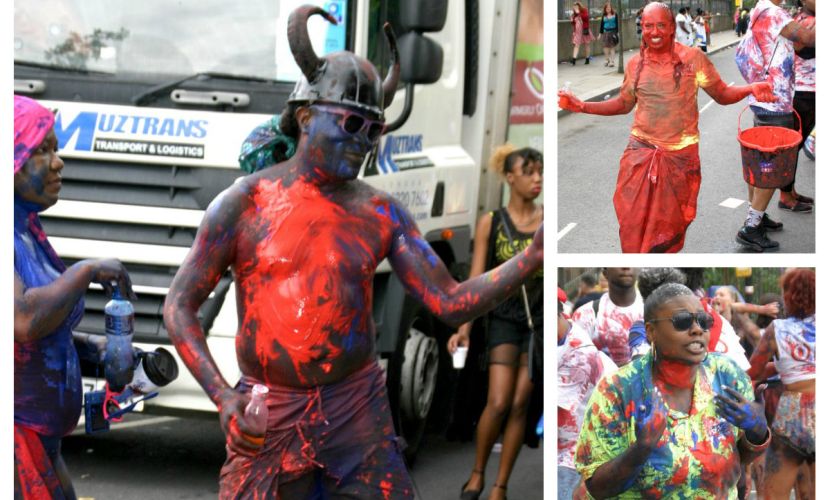 J’ouvert or Jouvay is at the heart of Trinidad carnival, and is also celebrated in other Eastern Caribbean islands. The name J’ouvert originates from the French jour ouvert, meaning day break or morning, and signals the start of the bacchanalia that is Carnival.

Jouvert is highly traditional and full of symbols culture and heritage. It is steeped in tradition and playing mud mas involves participants known as Jab Jabs. covering themselves – from head to toe – and others in paint, chocolate, mud, white powder or anything for that matter. It is Jouvert custom that everybody gets involved and it’s common to see a newcomer being hugged by a muddy revelers.

This traditional part of Carnival starts at around 2 in the morning and finishing after sunrise. Calypso and soca music are the dominating sounds of Jouvert in Trinidad the mass of revellers takes the street party winning and chipping their way to the savannah in Port of Spain in the early hours of Lundi Gras, before the daytime carnival parades.

The roots of Jouvert in Trinidad go back 200 years, with the arrival of French plantation owners. The French never colonised Trinidad, however elements of their culture remained. J’Ouvert evolved from the Canboulay festivals in the 1800’s, which were night time celebrations where the landowners dressed up and imitated the negres jardins (garden slaves). Following emancipation the newly freed slaves took over canboulay, now imitating their former masters imitating them.

Canboulay revellers, who carried lighted cane torches, were seen as a potential risk by the authorities, and the tension mounted leading to the Canboulay riots. It was eventually banned, and then was re established as Jouvert.
The spectacular costumes represent characters and events from the history and folklore.

Moko Jumbie Bats, Bookmen, Baby dolls, jab molassie, devil mas are all traditional Carnival characters that capture the elements of the past, and continue to tell the story. Getting to Notting Hill Carnival