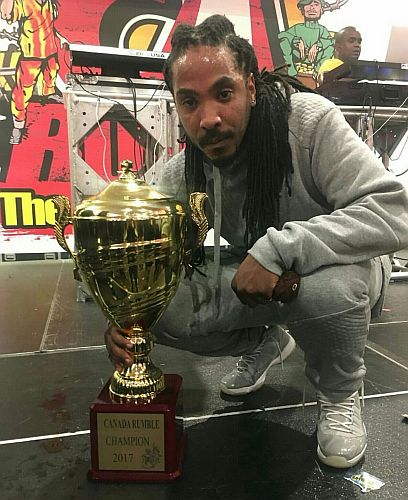 In the wee hours of the morning, before a massive crowd in a Toronto ballroom temporarily converted into a battlefield, a new sound was crowned “Canada Rumble” champion. Get to know King Attarney, the uber-skilled sound that scored an amazing victory on Saturday, January 28, defeating some of Canada’s most feared sound systems including Step-a-Choice, Outcast, Soul Survival, Twin Star and Mystic Sound. Staged by Irish and Chin in conjunction with Jill, the 2nd Annual “Canada Rumble” proved to be an entertaining sound clash from start to finish.

In the words of the late, great Sam Cooke, “It’s been a long time coming” for King Attarney, who has been an active sound system since 1983. But the missing piece to the 4-man sound which includes Pang, Garfield, Junior D and the owner Phantom has been international exposure, making the sound an ideal pick for “Canada Rumble,” despite years in business. The sound, which originally hails from St. Thomas, Jamaica, certainly left a lasting impression on the “Canada Rumble” crowd, which consisted of die hard clash fans, curious spectators and sound boys.

The epic clash culminated with a heated best of 10 “tune-fi-tune” round between King Attarney and Step-a-Choice, which was locked in a tie. As fate has it, King Attarney dropped a final tune “Heng Down Your Head” from Simple Simon, erupting the crowd and sealing their victory! Although Step-a-Choice’s well-orchestrated selection of Icho Candy’s “Captain Selassie” received a great response, it didn’t measure up to the impact of the Simple Simon. Respectively, Twin Star, Outcast, Mystic and Soul Survival were eliminated in earlier rounds. The humble, yet ecstatic King Attarney selector Junior D says, “I am happy to arrive, reach the big stage and achieve victory after being in this for so long….thrilled for myself and the entire King Attarney team. It’s the years of experience between Pang and I that I believe really gave us the edge.”

“I grew up listening to sound clash cassettes…that’s my era,” adds Junior D. After following historic sound clashes and playing sound for 16 years, glad to have the chance to reach certain levels….this is encouragement for Canadian sounds to keep fighting for it!”

“We are achieving what we set out to do with the ‘The Rumble Series’,” says Garfield “Chin” Bourne of Irish and Chin. “Namely, with Canada’s active sound clash environment, it’s only fair to offer their shining stars an international platform via the ‘Canada Rumble.’ Big up to King Attarney!”

Big tunes and dubs were surely a driving force of “Canada Rumble,” sparking massive responses throughout the night. Whether it was Mystic Sound’s new Mavado tunes (including “Beat & Teach”) that erupted the crowd, Outcast’s extensive slew of Chronixx dub plates or King Attarney’s wicked vocal round of foundation dub plates, there was certainly no shortage of music in this clash. King Attarney even dropped a “dead artist” selection from Garnett Silk in the “tune-fi-tune.”

Sound clash, the vibrant and competitive Jamaican-derived art form, permeated Canada last weekend. The “Canada Rumble” audience was afforded a slice of real, authentic sound clash! With the masses billing “Canada Rumble” as the most entertaining sound clash they have attended in quite some time, it’s fair to say King Attarney played their just role. In fact, one can go beyond that to say the winning sound captured the audience for the greater part of the night, capitalizing on kinetic stage presence and well connecting speeches and tunes.

Rest assure, you’ll be hearing the name King Attarney a lot more often, as the proud winner heads to “World Clash” — dubbed the “Super Bowl” of sound clash aka the “big league.” There, King Attarney will compete on an international stage against “Rumble Series” winners from around the globe, including for the first time in the event’s long running history, a fellow Canadian sound, King Turbo ( “World Clash 2016” and “Canada Rumble 2016” champions). The winning King Attarney sound warns King Turbo, “There will only be one ‘King’ at ‘World Clash’….see y’all on the battlefield, no pettinz!”

About Irish and Chin’s Rumble Series:

The Rumble Series was formally introduced by Irish and Chin in late 2015 to bring new stars into the sound clash industry. With a limited and seasoned pool of clashing sound systems, new faces are a must to sustain the vibrant culture. Further, The Rumble Series allows the talent and skills of promising sounds (those with regional buzz but not international exposure) to be showcased to mass audiences. With Japan Rumble (Fujiyama) and Canada Rumble (King Attarney) concluded, up next is “US Rumble” (April 22, 2017), “UK Rumble” (June 2017), “EU Rumble” (June 2017) and “Caribbean Rumble” (TBA).