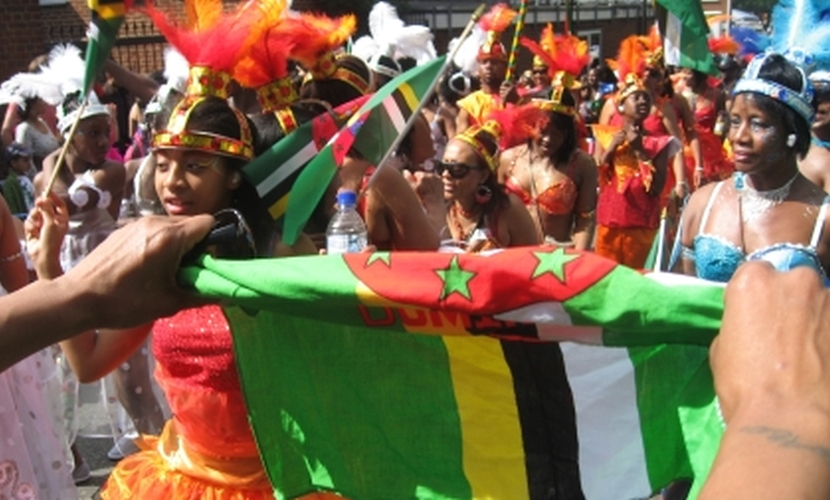 DUKA Mas Domnik UK is the Carnival Culture Band of the Dominica UK Association, a registered since 1978 and has been participating in the Notting Hill Carnival for over three decades initially in collaboration and individually over the last three years. The DUKA Mas Domnik UK brand officially launched in 2005.

DUKA Mas Domnik UK achieved third place in 2012 Carnival parade place with the theme ‘Paradise Nature Island – Sporting Mas’ and three consecutive fourth placing with the themes of ‘Olympic Mas Ole and New – On De Road to be Swifter, Higher and Stronger’ in 2011, ‘Forces of Nature’ in 2010, ‘Nature Island Eco-Warriors’ in 2009 and ‘Re-Unite and Celebrate’ in 2008 marking Dominica’s 30th anniversary of independence. ‘Still I Rise’ in 2007 commemorated the abolition of slavery, ‘Pirates of Dominica’ in 2006 recognising the filming of ‘Pirates of the Caribbean’ on the Nature Island of Dominica and ‘Mas Domnik Jam’ in 2005.

The theme for 2013 was ‘Flights of the Caribbean’ with the strap line ‘Re-Band Air Passenger Duty’ in support of the campaign to redress the discriminatory taxation that increases the un-competitiveness of flights from the UK to the Caribbean, making it is cheaper to travel to Miami than Jamaica, Barbados or Antigua, thereby making it even more expensive to get to the Nature Island of Dominica.

You are guaranteed fun on the streets of Notting Hill and we look forward to usual accompaniment of other Mas Band members following the DUKA Mas Domnik UK fete at the end of their parade.