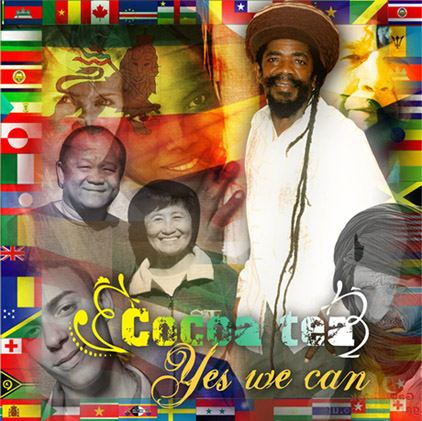 Zojak World Wide is pleased to announce that just a few months after recording the international hit, ‘Barack Obama’, Jamaican roots reggae star Cocoa Tea is in the spotlight again with his follow up single, ‘Yes We Can’.

‘Barak Obama’, which has been circulating for months on the radio, among reggae fans young and old as well as casual music fans around the globe, is praised for its participatory message and catchy melody. ‘Yes We Can’ is Cocoa Tea’s brand new, non-partisan follow up calling for unity between people of all political affiliations, races and classes. In cooperation with Zojak Worldwide, the leader in digital distribution, Cocoa Tea is making both tracks available for sale exclusively via the new website, www.cocoateabarackobama.com.

‘Yes We Can’ is Cocoa Tea’s response to ‘Barak Obama’. A rootsy, non-partisan appeal for all classes, colors, races and creeds to come together, ‘Yes We Can’ is a roadmap for people to unite across party lines, racial divide and international boundaries, despite personal differences.

Cocoa Tea sings, “Yes we can/Don’t let them tell us that we can’t/ Democrats and Republicans, let me hear you say yes we can, yes we can ”

Cocoa Tea says ‘Barack Obama’ and ‘Yes We Can’ are significant in part because they reflect a remarkable mix of popular culture and international citizenship. When asked why anyone should be interested in what a Jamaican reggae artist has to say about American or international politics, Cocoa Tea answers,

“Because of the message. It says things about decisions being made in Washington, DC which affect people of the whole world. We know the USA is the greatest superpower so somewhere along the line we know what happens in Washington, DC will affect the world.”

“This is not about class nor color, race nor creed,” Cocoa Tea sings on ‘Barak Obama’. “Make no mistake it’s about the changes all the people them need.”

The song ‘Barack Obama’ has struck a chord around the world and created a new generation of Cocoa Tea admirers while television appearances on CNN and FOX News as well as interviews with the BBC, the New York Times and New York Post have cemented Cocoa Tea’s place in international popular culture. ‘I been to Europe, Caribbean and America,’ says Cocoa Tea. ‘The response has been the same – overwhelming. People who don’t like Barack Obama [the candidate] like the tune. Is a tune people love. I was surprised because [in Europe people] responded like it was a European tune.’