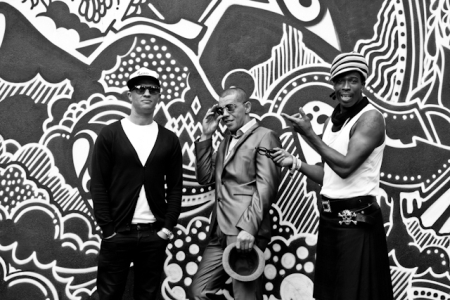 Laid Blak have been at the heart of Bristol’s urban reggae scene for over half a decade, drawing inspiration and energy from their home city, and using this to fuel the gigs and releases that have gained them a cult local following. Now the rest of the world is taking notice, resulting in a Rototom award for best Northern European Reggae band, and support slots with international stars such as Aswad, Nitin Sawhney and Julian Marley.

Formed initially as a studio project showcasing the talents of Jungle veterans DJ Bunjy and MC Joe Peng, Laid Blak have since grown into a heavyweight eight-piece outfit described as ‘the ultimate festival act’ by Brighton Noise. By turns catchy, hypnotic, furious and sweetly melodic, their music has a global appeal, fusing elements of rock, funk and bhangra to create a unique sound with a reggae heartbeat.

It’s infectiously danceable and optimistic, yet Laid Blak also have a more thoughtful side, and their lyrics detail the reality of city life with unflinching honesty.

“A particular favourite of mine…They have both the energy and dynamism of a great live performing band, but the soul and legitimacy of an interesting listen for your own collection” Darren Paul Thompson

“They’ve got presence to burn.tight musical and best of all, fun” Venue Magazine