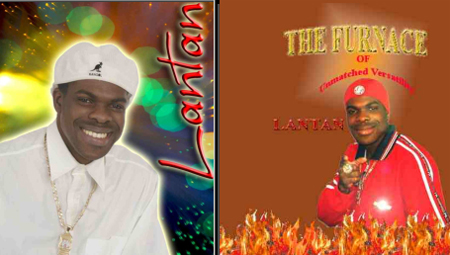 Growing up in Kingston Jamaica Mark Smith (aka Lantan) was immersed in the sounds of music, spending time from an early age perfecting his own style, entering open mic competitions for prize money, these were raw and fiercely competitive events, freestyle and counteraction rap. His growing reputation opened the door in the 90’s attracting sound systems djs to take him to cut his first dubplates, now gaining studio experienced Lantan has worked with countless producers, across the globe and has collaborated with artist like Vibz kartel, Nitty Kutchie, Wayne Marshall to name a few, and quite a few female artist from the rnb scene.

Lantan’s Lyrics are about Life’s lessons and experiences and his style is derived from reggae growing up in Kingston Jamaica, Where this music was a part of his everyday life even through school Currently Mark is performing live at venues in the UK and Europe/Japan and with the U.S. release of Truly Magical he’s set to tour venues in the States.

Lantan’s innovation is reviving the faded dub music that for years was dead in the water when reggae became over commercialised. Now with a cast of established producer/labels getting interested we’re seeing lantan’s hard core fan base explode into the mainstream market As some of the rap sensation sags clubbers are getting back to Lantans intricate lyrics through sound systems and fans calling out for more melody and songs counting on artists like him to make up for acts with watered down music and half cooked books that aren’t cutting the mustard

While the music gets real again Lantan and Blacksmith productionz are working on new ground breaking joints and creative ideas for the new generation market. Blacksmith is the Inspiration of old school and fresh new styles across genres captivating audiences beyond boundaries.
Interview 09
PEPE: I got to meet Lantan for a parley…
Hi Lantan you were touring Switzerland in Dec. How were the audiences how well did the local channels cover your music?

Lantan: Well I have been on tour in Switzerland on several occasions before and each time my audience seems to grow more I have got a good following from the Swiss masses and they like my style and appreciated my music well, and show me a lot of support and love, my gigs are always publicised well, and with the boost of the good promoters I often work with there.

PEPE: You’ve been releasing videos every year can you tell us about the shoots and planning for these?

Lantan: Yes I have got a few videos to date, for various singles etc. preparing for a music videos take a lot of dedication and rehearsal just like preparing for a big gig, lots of long hours doing shoots and creating props ideas etc. i just move with the flow and try to be myself rehearse and memorize my lyrics so I don’t mess-up when doing my shoots, I find that way it takes less shots and get things moving more quickly, music videos sets are a lot of fun.

PEPE: With your interest in film and the growing trend of music film have you any plans to go into acting?

PEPE: One of your tracks is used as soundtrack in a film can you tell us which and how it’s working out?

Lantan: Yes one of my tracks featuring Wayne Marshall titled ‘Lockdown’ is used as a sound track for upcoming U.S.A movie called ‘On Impulse’ the soundtrack album is also now available in best buy stores in the usa and on all major download sites on the worldwide web. This featured film is by New York based bishop films & entertainment and is set to do very well.

PEPE: Your label for the new album is A.C.M RECORDS what do you expect from this Label. How’s the album getting promoted?

Lantan: My new album ‘Truly Magical’ is been promoted thru various mediums throughout the usa and Canada by my current label, its receiving accolades from djs and radio across the spectrum and is anticipated and expected to do very well on the international market..so stay tuned

PEPE: Who is Lantan as a person? What do you do normally do away from the music scene?

Lantan: Well, I am a laidback person that is kind at heart and will help anyone genuinely, I am easy to get along with, but will not allow myself be taken for ride or be trod upon by others, I consider myself to be humbled, hardworking and always striving towards my goals in life, in my spare time I like travelling, poetry, exploring new cultures, tennis, movies, Live comedy, good food, meeting new people networking, socializing and enjoying good company.

If you go to Lantan’s MySpace site you get 10 tracks from a catalogue of recent recordings some from the new release Truly Magical out on 28th April 2009 on the American A.C.M Records. New tracks include the London recording with James Black ‘Breath’ a collaboration with veteran soul singer Gee Morris. Other tracks that you’ll hear on realdjlantan include ‘Shawty’ which is on the Furnace album ‘Beside Me’ and ‘Up in Here’ which are also on the upcoming album ‘Truly Magical’.

At Black Smith productionz which is a James Black/Mark Smith a.k.a. Lantan music partnership [http://www.myspace.com/blacksmithproductionz ]you can find tracks like Mountain top here concentrating on co-productions closer to club release’s for the us/eu market. It’s an electro trance track Promoted to djs and radio worldwide.

Lantan and James Black became friends from online networking and were mutually impressed by each others work and have combined to become a formidable production team. James is a veteran musician from the 80’s. He was signed to the Mercury label and is a Former member of Zuice band and 3rd nation group. He has also worked with Alexander o Neal, Sonique, Lionel Ritchie, and Anastasia and is currently a producer/remixer at Blacksmith studios

To view lists, releases offers and updates please visit the website. Lantan’s latest products can also be purchased at www.itunes.com and acmrecords.com