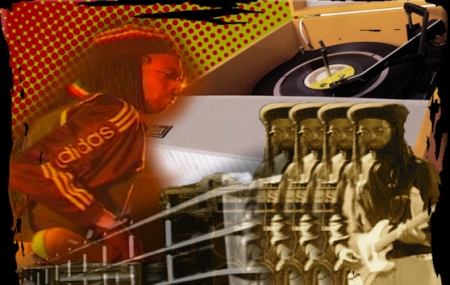 Over the last 25 years Lenroy ‘Bassie’ Guiste has continued to push the boundaries of music by collaborating with some of the biggest names in Roots and Dub music history. He was a member of the legendary British Roots band The Natural Ites & The Realistics and has toured with Macka B & The Royal Roots band, Sanchez, John Holt… the list goes on.

His new album Roots Rock Dub completely reinvents the whole genre of Dub by fusing elements of the past with a modern sound. The first track on the album ‘China Dub’ mixes drums and bass with traditional Chinese folk music to create a melodic and gritty track which sets the tone for the rest of the album. The track “Frontline” hits you with a heavy baseline and dark vocals from TAXMAN (Frontline) which will break any speaker into bits.

‘You Led’ makes the hairs stick up on the back of your neck with chillingly beautiful lyrics courtesy of JOSIE AKERS. Other notable tracks include ‘Dem A Murderer’, ‘2000 And Mine’ and ‘Purple Dazed’ which is Lenroy’s salute to the mighty JIMI HENDRIX.

Ossie Gad & The Ites Band are a Roots – Reggae band who formed in the city of Nottingham, UK. This group of musicians have worked together on several different projects over the last 30 years, notably The Natural Ites, The Realistics band, The Royal Roots Band, Positive Vibes and many more.