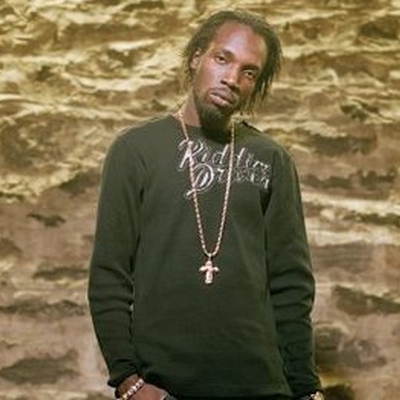 ‘Gangsta for life’ “Born ‘pon the gully an we never choose it.”
One of the most controversial Dancehall/Reggae artists to come from Jamaica

Known to the world as Mavado, the singer behind the eerie wails of ‘Anywayyy!’ and ‘Gangsta for life!’ which have recently dominated the airwaves was born David Constantine Brooks in the gully called “Cuba” – a micro-ghetto within Kingston’s “Cassava Piece” community, famous to reggae fans from the haunting Augustus Pablo melody of the same name.

In an era when dancehall MCs replaced the ranking dreads of Pablo’s day, the two main influences on the direction of Brooks’ young life were his grandmother and the music of Bounty Killer. “To tell the truth” he explains, “it was me gran’mother that first really bring me inna studio, ’cause she bring me inna church to sing. She always tell me to sing for her and that really give Mavado the courage to get fe love music an’ t’ing.” But if the sweet sounds of gospel provided the motivation, it was the gruff voice of Bounty Killer that proved to be the more powerful influence. “As a youth, Sanchez an Wayne Wonder are really my two singer dem, Sanchez have the voice of the angel. But me an’ my friend always say ‘Yo, Killer are the wickedest!’ So long as it’s Killer, it’s just my song, trust me!”

Idolization became mentorship when local reggae selector Foota Hype introduced the young singer to his soundclash hero. To Mavado’s amazement, ‘Killer start to show we the ropes’ of the music business, introducing him to the Daseca production crew. “Them are the yout’ which really bus’ Mavado, them come up with the Anger Management riddim, I sing for it, Killer endorse it and the thing just work.” Indeed, ‘Real McKoy’ Mavado’s 2004 debut single on the Anger Management beat – made him an overnight sensation in the Jamaican dancehall and established the blueprint for his future success; a sweetly melodic voice combined with a persona more like a gangsta rapper.

Dressed in ‘full black’ and speaking to the harsh reality ghetto youth could understand, but in haunting, otherworldly tones, Mavado carved out a unique style somewhere between the angel and the warlord. It was the next tune “Weh Dem a Do” with it’s “fly-ay ay up to the sky” hook over the club-tempo Red Bull & Guinness riddim that brought that voice to the overseas market, and magazine covers and adds to mainstream stations like New York’s Hot 97 followed.

The string of successful 45s continued with ‘Dreamin’ but although Mavado’s star rose in synch with his crew the Alliance, including fellow Bounty Killer protégés Daseca and Busy Signal, success did not come without some turbulence. During this period Brooks dealt with both the murder of his father and altercations with Kingston police, dramas that were played out in the media eye, most particularly an incident wherein he was pushed through a plate glass window at the Constant Spring police station, almost losing several fingers on his left hand to the cuts that resulted.

‘Gangsta for Life: the Symphony of David Brooks’, Mavado’s first full-length album, is an ambitious opus which follows the whole up and down arc of this life story. Opening with the singles that first brought him fame, interludes like ‘A Father’s Prayer’ and ‘Cassava Piece Radio’ weave the songs into a coherent musical saga. His father’s death is spoken to on the one-drop tune ‘Sadness,’ while ‘Pon The Gully Side’ and’Born and Raised’ document the singer’s rough upbringing even as they showcase the more angelic side of his gangster gospel.

The album’s centerpiece, however, is undoubtedly ‘Dying’ Already a hit on reggae charts and video shows in a version built around a tribute to Tupac rhymes, Mavado has redone the emotional song with original lines that show a new sophistication and a lyrical edge as sharp as any rapper’s: “I’m not asking for trouble, I’m just asking; Lord /When my enemies come to take me to the graveyard / Let the first shot they fire blaze my heart hard / …’cause I’d rather be a memory than a retard.” In those few lines Mavado speaks volumes and sums up the qualities that have made him the artist to watch ; the ability to voice his experiences in a way that’s captured the imagination of Jamaican youth at every step, but with a melodic power that makes it’s emotional appeal universal.