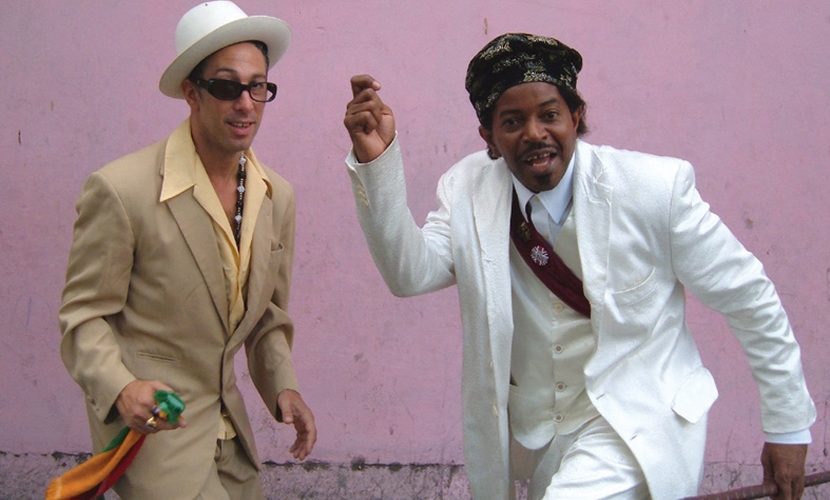 Award winning Ska Cubano is a London based band playing a combination of classic Jamaican ska, Afro-Cuban and Latin music.

Brought up in the early years of the Revolution by his loving but desperately poor Jamaican grandmother, Beny’s only clothes (until he was 13 years old, when shoes appeared) were shorts made of old flour sacks. The first gift he ever received was a pair of boxing gloves, from his father for his 18th birthday. “We were often hungry. I used to cry myself to sleep because I wanted a toy to be like the other children. At school I was given a hard time because my grandmother had taught me religion. I loved her so much: when she died, I just fell into an alcoholic hole for years, and nearly died in the gutter; I would have done if she and my saints had not been looking out for me”. His salvation was and is his voice : gentle, warm, rich, slightly cracked, strongly reminiscent of Beny More(the legendary Cuban singer of the 1950’s who drank himself to a premature death); some unreleased rarities?, supposedly by Benny More, are Beny Billy demos doctored up by crooked foreign producers. The resemblance is so close that his voice has been used for the soundtrack of a film biography of Beny More (“El Barbaro del Ritmo”) released in September 2005. Reviewer comments on his voice: “beautiful” “rich” “velvet” “pure Beny More” or according to the Guardian, “needs more work” (que?) If his laid-back singing style is retro, though, Beny is a cool cat of century 21, totally addicted to off-the-wall, freedom-fighting Ska Cubano. “I didn’t know Jamaican ska before Natty Bo and Peter Scott hit me with it, but now the rhythm runs through my head all the time. Ska is what I do”

“I’ve always wanted to bring people together. Jamaican ska did it – Ska Cubano does it even more, uniting races, people and cultures throughout the Caribbean and across the Atlantic – you can hear New Orleans , Africa and Southern Spain as well as the fusion of Jamaican and Cuban elements. I own lots of Cuban music – mambo and son – and could always hear its influence on ska; when I was in Japan supporting my friends the Skatalites (the biggest ska band of the early 1960’s), I realised why: three of the original members had Cuban roots, including Laurel Aitken, who was actually born in Cuba .”

Natty Bo director and producer of Ska Cubano, is an artist without boundaries – talented painter and sculptor, one-time circus performer, D.J., songwriter, producer and singer with major London ska band, Top Cats. “I’ve been crazy about ska since I was 10 years old and discovered a bundle of ska singles in a jumble sale,” he says, “but with Ska Cubano I’ve had the opportunity to take it in a completely new direction – well, actually, along with these great musicians, to create a completely new kind of music. Although the band is based in London , its birthplace is Santiago de Cuba , where life is hard, but also rich and real and vibrant. I go there to write songs, work out arrangements, absorb the vibe – and clean the cultural pollution out of my head.” “I’m into roots – unlike Havana , Santiago is really roots – and I encouraged the musicians to use elements which are mostly really African: instruments such as the Marimbula and the Botijuela, as well as Yoruba percussion, which I’ve then used on the record. Re-integrating two very musical cultures was, wow! an amazing experience and I have the sense that we might have done something quite important – as well as having a huge amount of fun.”

Eddie Tan Tan Thornton Trumpet
Casual superlatives suck, but ‘legendary’ is just how everyone describes Tan Tan. Born in 1932, he found himself at Kingston’s Alpha Boys School where the jazz nun?, Sister Ignatius, was the inspirational guide and teacher who turned wayward boys into Jamaica’s greatest musicians; ABS was consequently the cradle of ska, reggae and Jamaican jazz.

After several years in the emerging jazz scene of Germany , Tan Tan arrived in London , where his extraordinary talent was quickly recognised. For producers and big-name rock musicians of the sixties and seventies his became the most sought-after trumpet of the era .His recording and performing credits include The Beatles, Bob Marley, the Rolling Stones, Boney M, Georgie Fame and his all-time favourite, Jimi Hendrix, while he continued to play in between times with top jazz, ska and reggae names (Aswad ,Rico Rodriguez etc.). More recently he has featured in the horn section anchors of the Jools Holland Band, as well as Jazz Jamaica and the Jazz Warriors. At 73, are his lip, his wind, his technique and his imagination still great? Just listen to his many wild, witty solos and believe.

From Osaka via Chiba City near Tokyo, at 9 years old Miss Megoo? was already saxophonist with a brass band and by 14 was solo-ing in a festival orchestra. Later in her teens she began blowing her horn with Tokyo-based township jive and East African rumba bands before moving on to a jump blues group ( meanwhile making a better living as the musical diversion in honkytonks). She fell for Ska while DJ-ing in Tokyo clubs and sought out Gaz Mayall, then touring Japan with his Trojans. The Trojans included husband to be Natty Bo, with whom she moved to London where they put together Britain’s wildest ska outfit, Top Cats. Although no longer married to Natty, she still plays with Top Cats, features occasionally with the Trojans and has played with Mervyn Afrika and more recently, Hawkwind founder Nick Turner’s All Stars (Glastonbury 2004).

One of her big influences is Big Jay McNeely, with whom she jammed as a teenager, an experience which persuaded her to turn professional. Big Jay is the intensely energetic master of the honking sax, whose ability to whip teenagers into a frenzy got him banned from performing in 1950’s L.A. The pupil has now become the master: hold on to your seats for Megumi’s screaming, squeaking alto sax solos. Said The Independent on Sunday “elegant and strikingly beautiful.. a star in her own right whose quirky, intense solos get the biggest cheers…” as well as her grinding, growling baritone.

Rey Crespo Double bass and co-musical director
Born in Havana to a mother who herself was a famous singer, Rey spent 10 years at Cuba’s premiere music academies, studying composition, arrangement, guitar and bass. His emergence as a professional musician -bass virtuoso and bandleader- came via recording and performing with great Cuban artists such as Omara Portuondo, Elena Burke, Cachao, sonero mayor Raul Planas and the legendary Ruben Gonzalez. During this time he also worked with Peter Scott of casino sounds. In 1997 he re-located to London and participated in tours by major stars including Gran Combo de Puerto Rico and Africando, later forming his own bands.