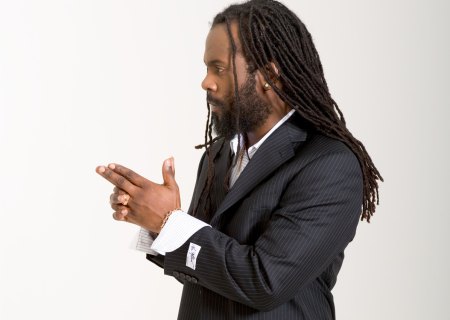 Caribbean’s most adroit lyricist of the day, Bunji Garlin, is poised to make an explosive impact on the global music arena. Add to his phenomenal lyrical abilities Bunji’s astonishing vocal flair and you have an unstoppable force that renders audiences mesmerized from his opening lines.

Hailed as a voice calling out in the wilderness on behalf of the common man, Bunji is one of the few artistes that have successfully bridged the generation gap as well as broken through the social strata, creating songs that explore and address a myriad of issues including crime, discrimination, prejudice, poverty, sexual deviation and political pandering. Of course Bunji also explores the lighter side of living through his songs created just for dancing and romancing the ladies. His unique lyrical escapades into the realm of romance and sexuality earned him the moniker, Bunji Garlin the girls dem Darlin’ and at the same turn he was dubbed the Fireman because of his claim that he has come to burn all evil with his scorching lyrics. Bunji lives in the hope that his songs will touch hearts and change lives around the universe, playing his role in bringing all of mankind to appreciate Soca and Ragga Soca.

His new album released through VP Records, ‘Global,’ is another step towards achieving those goals as Garlin has stepped up to a higher level musically. The anticipated album features Bunji’s signature blend of dancehall, soca, and reggae. Highlights include stand-out track ‘Brrrt’ on the Bobby Konder’s March Out riddim, collaborations with the legendary Freddie McGregor on ‘One Family’ and hip hop artist Chris Black on ‘Swing It.’

As far as Bunji Garlin is concerned, he has thus far only brushed the surface of what he has set out to achieve musically. His desire is to see the soca music of Trinidad and Tobago gain respect on a universal level, taking its place as the most powerful and infectious genre. VP Records will provide this platform of world-wide distribution on his upcoming album ‘Global.’ It is another step towards achieving those goals as Garlin has stepped up to a higher level musically. Join the journey and be revived.

Bunji Garlin (born 14 July 1979. His real name is Ian Alvarez and he married fellow Soca artist Fay-Ann Lyons on December 23, 2006, daughter of legendary Soca singer Superblue. He is also a second cousin of singer Patrice Roberts, who performs alongside the popular Machel Montano. Bunji and Fayann had a baby girl on 28 February 2009 minutes after noon via ceasarian. Bunji was not there due to contractual obligations.

Bunji has won Trinidad’s Soca Monach competition on several occasions; 2002 (tied with Iwer George) with ‘Down in the Ghetto’, 2004 with ‘Warrior Cry’, 2005 with ‘Blaze the Fire’ Both songs were produced by then band member Shawn Noel (Da Ma$tamind) and 2008 with ‘Fiery’ He placed 2nd in the International Soca Monach 2009 with Clear De Road, while his pregnant wife placed 1st with Meet Super Blue. She also won the Groovy Soca Monarch title that same night with Heavy T Bumpa.