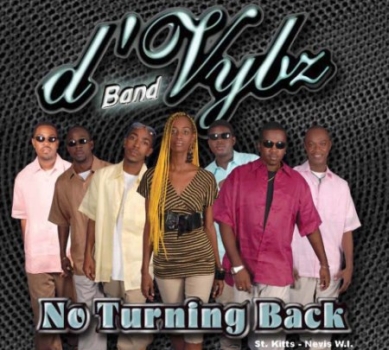 D’Vybz grew out of the vision of three talented and much revered young Kittitian musicians. The three envisioned a Caribbean musical group that surpassed any that preceded in terms of musicianship, professionalism and management. This was the vision of Steve ‘Steba’ Dublin, Carl ‘Ozzy’ Osbourne and Chad Sucky Benjamin. After many years as the musical core of the regionally acclaimed Nu-Vybes Band, Steba, Ozzy and Sucky ventured out from the Nu-Vybes to pursue and achieve the ideal that they envisioned.

For years the three were the heart and soul and the musical core of the band Nu-Vybes. Now they have joined forces with the 2003 St. Kitts & Nevis Soca Monarch, Jacinth ‘Shakki’ Smithen and talented performer Lynshel ‘Shakkal’ Peets, (as Lead Vocalists); along with the energetic and youthful drummer, Emris ‘Jay’ Forbes and young musical phenom Gavin Charles on 2nd Keyboard, Bass and Programming to form the idominable musical force known as d’vybz.

The bands first event, which was themed d’Vybz Rag andFlag Concert, drew a record breaking crowd at the Club Kactus the premeir night club and event center in St.Kitts. Thousands packed the club and were not disappointed as the band played a wide variety of local, regional and international hits as well as songs from their debut album No Turning Back.

The band’s first release ‘Hello’ was a massive carnival hit and stood steady at the number 1 position in all the local radio stations top 20 carnival countdowns. The band’s debut album followed, produced by bandleader Steve Dublin along with Andrew Denny of Barbados, and was an immediate hit, as songs like ‘Turn it up’ and ‘One Time To Many’ dominated the airwaves.

The bands presence in the 2006-07 carnival was seen by many carnival and music fans and observers as the catalyst for what has been one of the best years musically for St. Kitts-Nevis carnival.

Bandleader Steve ‘Steba’ Dublin was recognized during the season as being one of only two local producers to have produced or co-produced at least 5 road march champion songs in St.Kitts. He along with Ellie Matt are also the only two producers to either win or placed 2nd in at least 9 road march title races in St.Kitts. Steve’s genius is exhibited in hits including Kittitian road march champion songs ‘Hand Signal’ (1997), ‘Street Style’ (1998), ‘Ting Lang’ (2005), ‘Step Up’ (2003) and the massive hit ‘Sugar’ (2002) as well as other hits inclduing ‘Tempo’, ‘Forward On’ and ‘Keep on Moving’. Turn it up was one of the two biggest road march hits for St.Kitts Carnival 2006. ‘Turn it Up’ along with ‘Masquerade’ by Small Axe were the two top contenders for road march. The road march title eventually went to the Masqeurade but by only the narrowest of margins.

The band’s debut CD was widely recognised as the best St.Kitts-Nevis Carnival 2006 CDand they became was the most contracted band for the carnival season.

Their sophomore album, LIFE, features massive St.Kitts-Nevis carnival hits DJ Play, Party in da Streets and the anthem My Life. The bands highly intoxicating and rhythmic fusion of soca, dancehall and hip-hop comes out in the hits ‘So Wine’ and ‘What if?’ and the raw street jammer ‘Warrior’ have all contributed to the bands meteoric rise on the St.Kitts-Nevis and the Caribbean music scene.

In 2010, Basseterre, St.Kitts the 14th edition of the St.Kitts Music Festival d’Vybz joined local music superstars Infamous and Rohlensha as thier backing band.

“I love d’Vybz music but I was most attracted to their experienced musicians and energy,” said Infamous Manager Diego Spanner. “So it was really an easy decision to approach d’vybz about working with us for the music festival,” Spanner continued

d’Vybz burst unto he regional soca music scene in 2006 with hits Hello, Tun it up and Natty Dread and then followed up in 2007 and 2008 with huge hits including DJ Play and Having a Ball.