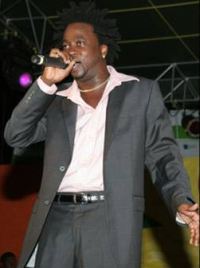 Born July 29, 1973, on the Spice Island of Grenada, Wilt Cambridge, popularly known as Tallpree, has become a favorite of “old women” and young alike. Although his 1999 hit “Old Woman Alone” has brought him a new recognition with its phenomenal success, Tallpree has been on the music scene since 1989.

Formerly known as Mr. Evilus, Tallpree began performing as a dancehall artist in Grenada, getting his start by hitching rides from his home in St. Georges to anywhere he could get a chance to perform and be heard on the microphone.
For years he performed as the opening dancehall act for many of the big name artists that visited Grenada such as Super Cat, Maxi Priest, Barrington Levy , Beenie Man, Bounty Killer and Buju Banton.

Well received by his Jamaican peers, he has even participated in clashes with Merciless and Sean Paul in Grenada. Tallpree has great admiration for Bounty Killer because his lyrics have a political message that reaches out to the poorer classes, and that is something that he feels relates to his own life and style of song writing. While remaining the #1 Dancehall artist in Grenada, Tallpree made the switch to soca.

In 1997 he began with his soca career with “Ram-e-Deh”. His 1998 song, “Pound-a-Rice” paved the way for the 1999 international hit “Old Woman Alone”. It hit the music scene by storm from the introductions infamous line “where de jab jab posse de”. Tallpree following the success of SpiceMas 1999 went on to compete in Trinidad and place third. The Old Woman tune was accompanied by an elbow swinging dance that mashed up the soca scene across the Caribbean and enjoyed the same success in Miami, NY, Toronto and London. In 2000, “The Grave, The Jail and The Hospital” won him the Road March title in Grenada. But it was in 2003 Tallpree was finally crowned soca monarch in Grenada for smash hit “Carnival Maddness”. He has continued to put out big tunes such as “Jennifer”, “Invasion on the Rags”, and more recently “From de Heart” and “Miss Antisocial”.

Tallpree can be found making appearances all over the Caribbean, and North America and continues to bring originality and creativity to the craft. Look for Tallpree to continue to bring a unique sound to soca year after year.