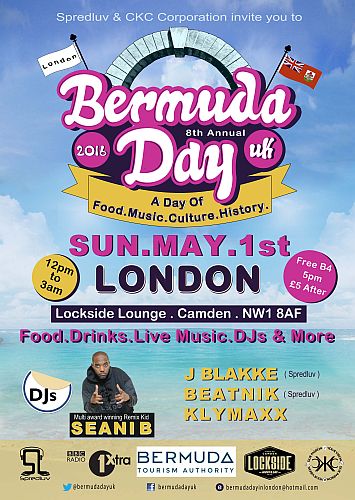 The days are getting longer and that can only mean one thing, that Bermuda Day in the UK celebrations are here once again.

For the 8th year running, Bermudian vibes will take center stage in the heart of London’s Camden Town as Bermuda and her beautiful people takes over Lockside Lounge once again for a fun-filled day, packed full of great music, fantastic food straight off of the barbeque, a great selection of Bermudian drink and live music from Bermudian artists, including Zion, Bento, Sista Mandy and Force 1 Combat (flying in from Bermuda to perform).

As a special treat we have the multi award winning Remix Kid SEANI B (1 Xtra) making his Bermuda Day debut. As a globetrotting DJ specialist that can mix it up with a whole heap a style, from his bucket load of mashups and remixes Seani B needs no introduction to reggae heads from all over the world. He has worked with everyone from Shaggy and Vybz Kartel to Lauryn Hill and many more in between, either in his 1xtra studio or under his Big League Productions imprint.

As well as hosting 1xtra’s weekly Reggae Dancehall show, Seani B is a heavyweight producer and won his first Grammy earlier this year for his work on Morgan Heritage’s 10th album “Strictly Roots”.

This is not to be missed!

This is set to be another great day as Bermudians and non-Bermudians come together to party, enjoy island flavors and celebrate Bermuda Day in true Bermy-style with loads of codfish cakes, jerk chicken, potato salad, peas and rice and fish chowder. Plus, Bermudian DJs will set a tropical landscape on the 1s and 2s, sending Bermudian vibes across the Camden Lock.

Over the years the Annual Bermuda Day Celebrations has been a great day to enjoy a day of music, food, drink and dance, while basking in the beautiful surroundings of Camden Market and soaking up the joyous atmosphere that Bermuda Day brings.

The vibes will begin to build on the terrace from 12pm.

Direct coaches to event:
Direct coaches available from Birmingham, Manchester and Warrington for less than commercial rates. Easy booking process via the Bermuda Day UK (@bermudadayuk) page or contact us via email at bermudadayintheuk@gmail.com. If you have a different pick-up location and at least 16 friends that want to come, contact us and we will book a special coach just for your group.

Interested in a late night coach so you can stay until the party ends? Contact us today to express your interest and if we have enough people, we will arrange a late night coach from London to Birmingham, Warrington and Manchester.