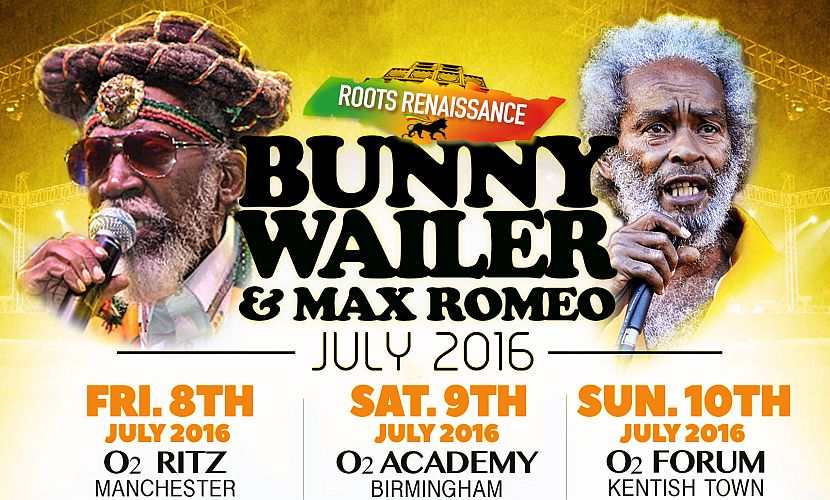 Bunny Wailer is a living legend and more than fifty years after he formed the most influential reggae band in history, he has rightfully become a respected elder statesman of the Jamaican music scene. Singer, songwriter and percussionist, Bunny formed one of the world’s most well-known reggae groups with his stepbrother Bob Marley and Peter Tosh, and Wailers’ involvement in bringing reggae and the message to an international audience has been huge. He sang lead vocals on the original recording of ‘Pass It On’, as well as ‘Reincarnated Souls’, the B-side of the Wailers first Island single of the new era and since the release of his debut solo album ‘Blackheart Man’ in 1976, Bunny has released over 30 albums and claimed three Grammy awards for Best Reggae Album to date.

2016 sees this great and honoured reggae icon celebrate the 40th anniversary of his influential debut album, and on a recent stop in New York, Bunny spoke to FOX 5 News about his music, the message and love of live performing saying;

“Stage is my life. Robert is not here, Peter is not here so I am going to have to do that, and do it to the best of my ability, as a Wailer… The message is: One love, one heart, let’s get on stage together to make it right.”
Max Romeo caused quite a stir with controversial track ‘Wet Dreams’ in 1968 which spent six months in the UK charts, but as one of the most important figures in the roots scene, his vast back catalogue includes hits from his time with vocal trio, the Emotions, and stunning solo material spanning the artist’s 50-year career.

Winning a talent contest at aged 18 prompted Maxwell Livingston Smith to follow his musical dreams and since these humble beginnings, he has gone on to produce some of the genres classic and most recognised songs; from the politically charged ‘Let The Power Fall On I’, to the Lee Perry produced ‘Sipple out Deh’, ‘One Step Forward’, ‘Chase the Devil’ and ‘Three Blind Mice’, co-producing and starring in musical ‘Reggae’ and working with bands like The Rolling Stones makes Max Romeo a colourful character.

Credited with launching a new style of reggae and always continuing to tour and record, Romeo has worked with an incredible list of labels and producers (Bunny Lee, Lee Perry, Jah Shaka, Tapper Zukie to name a few), and as a result his music has a depth of style that is reflected in his extensive and diverse discography.

Tickets on sale now from ticketweb.co.uk