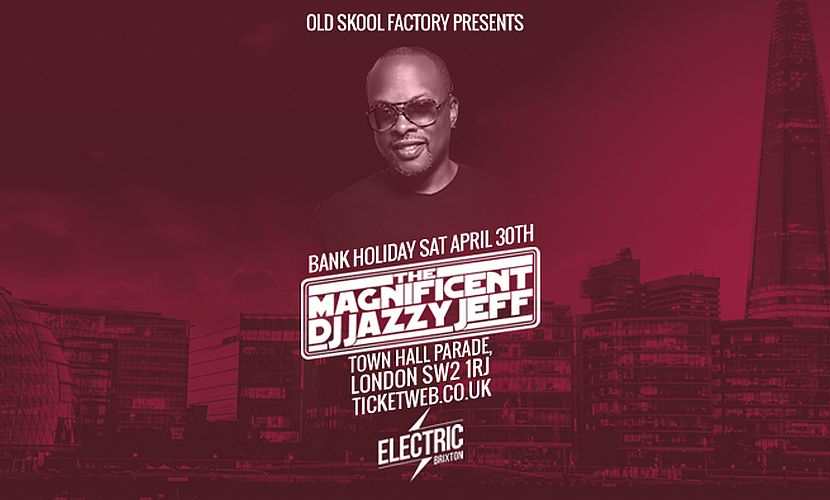 Old Skool Factory famously known for bringing you premier Old Skool nights in London are proud to bring you The Magnificent Jazzy Jeff to London, for a one-off, one-night only session on Saturday 30th April 2016.

The multi-platinum selling, award winning DJ brings his inimitable sound, skill and style to the Electric Brixton for an unforgettable night of the dopest beats.

Admired and respected by both fans and peers of the music industry alike, Jazzy Jeff IS the DJ’s DJ, with an incredible musical history spanning back to the 80s, playing an influential role in hip-hop and turntablism culture. Beginning his legendary career as one half of duo DJ Jazzy Jeff & The Fresh Prince, racking up accolades for hits including ‘Parents Just Don’t Understand’ (which they won the first Rap Grammy Award in 1989) and the chart-topping anthem ‘Summertime’, Jazzy Jeff then went on to expand his repertoire by running production company A Touch of Jazz, shaping the careers of urban icons including Jill Scott, Talib Kweli, The Roots and Eminem.

But as champion of the turntable and certified master scratcher, catching Jazzy Jeff work his magic behind the decks is always a very special moment, excitedly getting you moving and grooving to his flawlessly mixed, on-point selections!

The Magnificent Jazzy Jeff at the Electric Brixton on 30th April will be part of your Bank Holiday weekend you definitely won’t want to miss!

Tickets start from £15 via www.ticketweb.co.uk