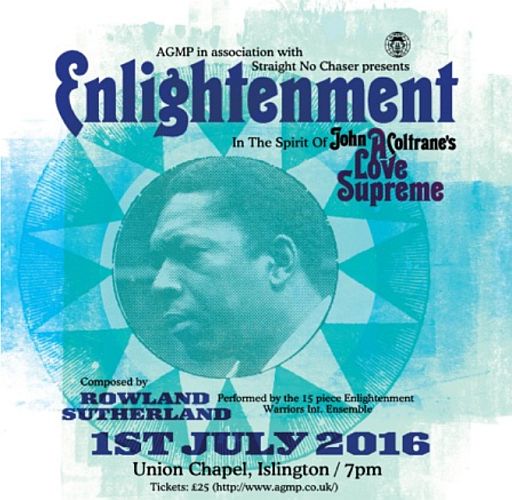 ‘Enlightenment’ at Union Chapel in Islington. An evening in the spirit of A Love Supreme by John Coltrane.

In 2014 ‘Enlightenment’ was chosen to close the final day of Meltdown on the Southbank and sold out two performances in the Queen Elizabeth Hall. Both received standing ovations and one full performance was broadcast nationwide by the BBC.

The Enlightenment/Warriors International Ensemble unites 15 London based master musicians from a myriad of cultural backgrounds. They bridge the religious divides that haunt our war torn, turbulent world to deliver a hugely positive message of Unity, Love and Enlightenment.

“Enlightenment” returns to the Union Chapel in Islington on 1 July 2016 to further its mission of creating a radical, uplifting and shape shifting musical encounter that embraces and unites an array of global spiritual traditions within the framework of an original score by master flautist Rowland Sutherland.!!

As with ‘A Love Supreme’ — the iconic inspirational source of ‘Enlightenment’ — the suite evolves over four movements. The Ensemble vocalists – Cleveland Watkiss and Juwon Ogungbe – embrace the words and poetry of Sri Swami Satchidananda Saraswati and the late John Coltrane. A trio of Bata drummers – Adé Egun Crispin Robinson, David Pattman, Oli Savill – sing praises to the Orishas of the West African Yoruba religion of Ifa while trading rhythms with Indian master percussionist and modern day mystic Ansuman Biswas.!!

The shimmering sound of the kora weaves its way into the mix through the presence of the Senegalese griot Kadialy Kouyate. The foundation of the Ensemble is provided my the mighty Mark Mondesir on drums and bassist Yaron Stavi – who you may know from his work with Nigel Kennedy and Ian Dury’s Blockheads. The magical Nikki Yeoh holds down the seat at the Steinway and Pat Thomas travels the spaceways with his unique electronic explorations. Musical Director Orphy Robinson doubles on Xylosynth & Marimba while the Ensemble frontline is occupied by ethereal Rowland Sutherland on flutes, the deep sound of Fayazz Virji on trombone and the incredible Shabaka Hutchings of Sons Of Kemet on tenor saxophone & bass clarinet.!!

No one performance is the same – it travels with energy on the night. ‘Enlightenment’ is alternatively meditative and fiercely majestic. It combines words sound and power and sends out a healing message into the Universe of Elegance, Elation, Exaltation and Supreme Love! !!