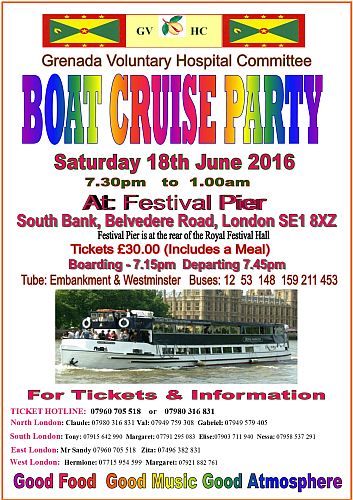 The Grenada Voluntary Hospital Committee (GVHC) will be hosting its annual charity river boat cruise party on Saturday, 18 June 2016 from 7.30pm to 1.00am – see leaflet attached for further information.

The boat is called Royal Princess. It will leave Festival Pier at 7.45pm. Boarding will commence at 7.15pm.

Festival Pier is at the rear of the Royal Festival Hall. It is less than two (2)
minutes’ walk from the London Eye.
Festival Pier is on the South Bank between Waterloo Bridge and
the Golden Jubilee Bridge.

Car Parking: There is free parking on Waterloo Bridge after 6.30pm. The
pier is three minutes walk away.

There are five (5) car parks on Belvedere Road SE1 near the London Eye.
A lower rate is charged after 6.00pm.