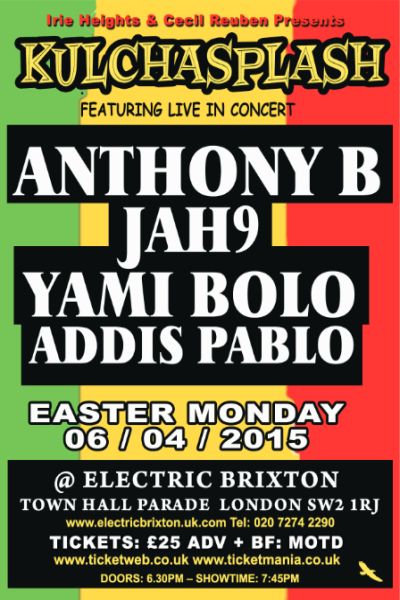 Kulchasplash, the greatest one day international roots showcase in the UK , takes place on Easter Monday 6 April 2015 at the Brixton Electric, featuring a dazzling line up of roots reggae artists spanning 4 decades of Jamaica’s highly renowned and heralded Roots music genre. Sharing the stage for one night of scintillating live performances will be:

Anthony B
The conscious bobo dread whose razor sharp lyrics and entrancing live performances set “Fire Pon Rome” and propelled him to international stardom in the late 1990s. He has continued waving the banner for uplifting subject matter and songs that address the cruciality of people of African descent expressing themselves in their own voice. Nevertheless, this dynamic artiste is no ‘sit pon stool’ activist; his live show generates sufficient energy to enervate a small nation’s power grid. Come with your hearts open. Leave with you r belly full.

Jah9
This young empress’s voice defies the dimensions of her physical body and appears to emanate from a soul more aged than its current vessel. Old school blues improvisation, meets hard hitting lyrical dexterity, in a rich imaginative synthesis of vocal clarity and conceptual complexity. Her philosophy is profoundly spiritual, and her style is Jazz on Dub. Along with Chronixx, Jesse Royal, Protoje and Kabaka Pyramid stands at the forefront of roots music’s new wave presently gathering momentum in Jamaica. She will perform with her band in London for the first time.

Yami Bolo
A veritable general of the roots movement, Yami began performing at the age of 11 and has focused on recording “Jah Centred” reggae music since the1980s. Yami’s magical voice speaks directly to the heart and his singing style has been passionately confirmed by discerning criti cs as a “cry out in the wilderness,” inspiring strength joy and hope. This will be his first UK performance in 10 years

Addis Pablo
Addis Pablo, son of legendary dub pioneer and composer Augustus Pablo, is breathing new life into the roots reggae movement as he continues the legacy established by his late, great and deeply reverenced father through the musical mission imparted to them through then inspiration of His Imperial Majesty Haile Selassie. Sounds on the night are provided by Suns of Dub, CJ Don & Jahrevelationmuzik

Kulchasplash will be one of the highlights of London’s reggae calendar That natural mystic flows through the air again!!! Doors open 6.30pm till 11pm. Showtime 7.45