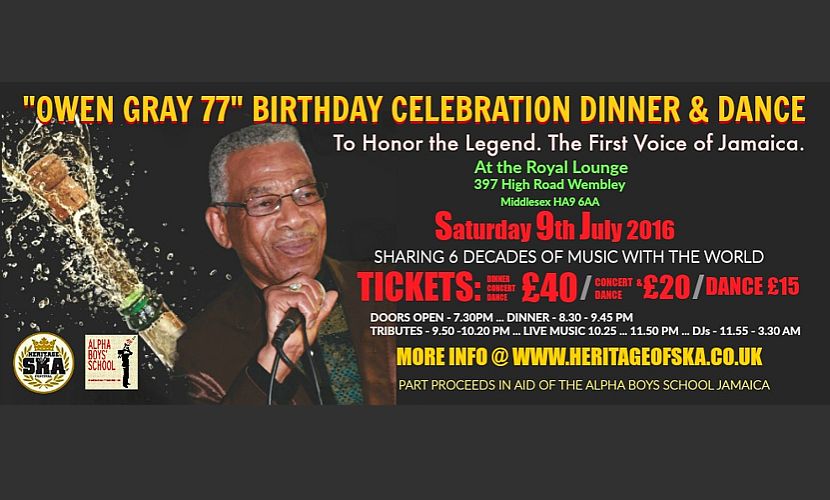 a very special occasion. The 77th Birthday Dinner and Dance Party. In Celebration of the Life and Works of the Living Legend Mr. Owen Gray the Jamaican international songwriter and singer.

He wrote and recorded his first song ‘Who Saw The Lightning’ for Simeon Smith the producer at Federal Studio in 1957 and this song was released on Smith’s Hi-Lite record label and sold at Smith’s Hi-Lite Music Store at the corner of Spanish Town Road and Harris Street, Rose Town, St.Andrew.

Owen Gray recorded for producers like the legendary Clement Seymour Dodd of Studio One and Sir Coxson Downbeat fame who he recorded the first singing special record for in history titled ‘On The Beach’ that the great Rolando Alphonso the saxophonist arranged. He recorded duets with Millie Small who herself had a number 2 in the British charts in 1964 with ‘My Boy Lollipop’ that was arranged and produced by the genius international guitarist from Jamaica Ernest Ranglin for the executive producer Chris Blackwell of Island Records. Ray also did classics like ‘Shook Shimmy And Shake’, ‘Darling Patricia’, ‘Please Let Me Go’ and ‘Midnight Rock’ et al.

When he was brought to England for the first time in May 1962 by the Rickards couple,(American husband and Canadian wife),who had two record shops in Brixton,London,because of his elder brother Ralph Gray who expedited his contact with the Rickards, Owen Gray continued recording and performing in England. He performed at the renowned Marquee Club at 90 Wardour Street, in London’s fashionable West End where he shared the stage with Soul greats like Ben E King, Wilson Pickett, Sam and Dave, The Platters, Solomon Burke et al and he wowed the audiences just like them and more than them at times.

In July 1974 he recorded the hit ‘Bongo Natty’ for Bunny Lee at King Tubbys studio in Waterhouse, St.Andrew, where Pat Kelly the songwriter and singer was the engineer.

In the 1990s he started going to Brazil because his records were popular there and he is still a constant performer in Brazil alongside other Jamaican singers who are popular and thus perform regularly in Brazil like Jimmy Cliff, Eric Donaldson, Michael Rose, Honeyboy,brother Cole/Sydney Crooks, The Pioneers et al.

More info at Heritage of Ska