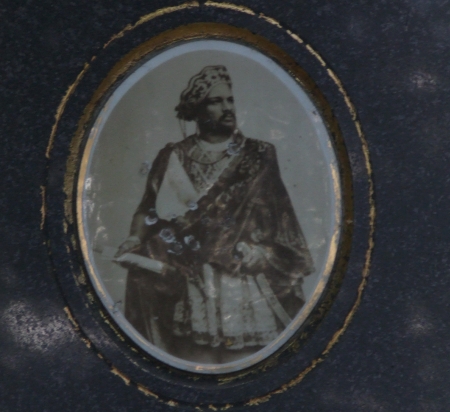 Ira Aldridge, one of the most famous Shakespearean actors of his time. Also known as the African Roscius, his career on the British stage spanned 30 years. He performed in the UK and in Europe as the star in melodrama, romantic drama, operetta, comedy and Shakespeare, with his most famous role as Othello at the Theatre Royal in Covent Garden. He rose to become one of Europe’s leading performers and more honours were showered upon him than any other actor, breaking racial barriers during a time when many of his black American contemporaries were still enslaved.

Ira Aldridge was born near New York City in 1807, his parents Reverend Daniel and Luronah Aldridge, were ‘Free Blacks’. He went to school at the African Free School in New York, (where many prominent figures in the US abolitionist movement were also educated) and then at his fathers request attended Schenectady College, to study theology. He didn’t complete his stay there and left to pursue his love of acting. He had a natural talent and became active in New York’s amateur theatre scene. Aldridge gained acting experience with the African Theatre, an endeavour established by free black Americans in 1820. He made his acting debut as Rolla, a Peruvian character in the Richard Brinsley Sheridan adaptation of August von Kotzebue’s Pizarro.

During this time it is thought he met brothers, James and Henry Wallack, leading actors performing in New York and London, which may have encouraged him to travel to England in 1824. He enrolled at the University of Glasgow, receiving a gold medal for excellence in Latin composition, whilst developing his voice and theatre skills.

A year later, at aged 18, he married Miss Margaret Gill, from Yorkshire. The couple’s inter-racial marriage caused a furore and agitated the pro-slavery lobby. The same year on the 10th October 1825, made his stage debut as the first black actor at Royal Coburg Theatre (today the ‘Old Vic’), London. He played the role of Prince Oroonoko of Africa sold into slavery in the play ‘The Revolt of Surinam’, or ‘A Slave’s Reveng’e, to a critical and predominantly hostile press, some expressing overtly racist comments. He was initially billed as ‘The Celebrated Mr. Keene, Tragedian of Colour.’ By 1827, it was changed to ‘The Celebrated Mr. Keene, the African Roscius.’ He took on the stage name Keene, in order to attract attention to his shows. It was common at the time for actors to adopt a name of a celebrity, and Edmund Kean was very highly regarded. It is thought that Aldridge took to using his real name again sometime in late 1832, and went on to act with Keene’s son Charles years later.

Whilst his audiences were largely captivated by his work, it was the London critics of the day were largely responsible for stifling his chances to establish himself as a serious actor rather than a novelty act.

Over the following years, after being blackballed from the London’s stages, he travelled all over England, performing in packed theatres. Halifax, Manchester, Edinburgh, Lancaster, Sunderland, Sheffield, Newcastle, Liverpool, Hull and Belfast are among some of the places he performed the roles of Othello, as well as several white roles as Shylock, Macbeth and Richard III to great applause. He was received well, and his performances received much praise everywhere, but London’s West End.

In 1833 after Edmund Kean’s death, shortly after collapsing on stage whilst playing Othello, Aldridge took on his landmark performance. Aldridge’s performance as Othello at the Covent Garden marked his return to the London stage after a many years touring the country. At the age of 26, he took over the lead role as Othello at Theatre Royal Covent Garden, replacing one of the countries leading names.

Again despite the audiences, the critics Aldridge continued to pour scorn on his work and race, so he continued to tour the country until in 1852, Aldridge and his family headed to Europe. He toured in Brussels, Cologne, Basle, Leipzig, Berlin, Dresden, Hamburg, Prague, Vienna, Budapest, Danzig, St. Petersburg, Moscow and Munich and was ranked as one of the finest tragedians of his time. The plays were often performed in the local languages, using a local cast with the exception of Aldridge’s roles.

Honours were showered upon him wherever he performed, like no other actor. At one stage he was said to be the highest paid actor in Russia, in addition to his many honours, including; letters from dignitaries around Europe, the first-class medal of arts and sciences from the king of Prussia (1853), the Grand Cross of Leopold, a Maltese cross, with the medal of merit, from the city of Berne, member of the imperial and arch-ducal institution of our lady of the manger in Austria, commission in the Army of Haiti in the Seventeenth Regiment of the Grenadiers (1827), receipt of membership in the Imperial and Archducal Institution of Hungary’s Our Lady of the Manger (1856); Switzerland’s White Cross (1854); knighthood in the Royal Saxon Ernestinischen House Order and receipt of the Verdienst Medalof the Order in Gold (1858); receipt of the Imperial Jubilee de Tolstoy Medal (1858), among others.

He returned to London after his European tours so celebrated and honoured he could no longer be ignored. In 1858 he finally performed at the Lyceum, the audiences and critics alike were full of praise. He was by now a star of the stage, he owned properties, and applied for British citizenship in 1863.

His first wife died in 1864, and the next year, in April 20, 1865 he married his mistress Swedish Countess Amanda von Brandt of Sweden, by whom he had had a child (Ira Daniel) with five years earlier. They went on to have four more children, Irene Luranah Pauline Aldridge, 1860-1932, an opera singer, Ira Frederick Olaff Aldridge, a musician and composer, Amanda Christina Elizabeth Aldridge (Amanda Ira Aldridge), an opera singer, teacher and composer who used the pseudonym Montague Ring, and born shortly after Aldridge’s death, Rachael Margaret Frederika Aldridge, who died in infancy. He continued to tour Russia and Europe, to great acclaim being the first actor to perform in Serbia and Croatia as well as performing Shakespeare in the Russian provinces. He died on tour, doing what he loved, in the Polish town of Lodz, on 7th August, 1867, aged 59. The whole town turned out to mourn the passing of the extraordinary artist. His widow, Baroness Aldridge, died in 1915, her ashes strewn in Highgate Woods, London.

He had spent his life dealing with racism, and would often finish a performance with an anti slavery message or song. His accumulated wealth meant he could contribute financially to the abolitionist movement and related campaigns. There is a chair at the Shakespearean Memorial Theatre in Stratford-on-Avon, England, dedicated to the memory of Ira Aldridge. There are additional black American tributes to Aldridge including the Ira Aldridge Theatre at Howard University, in Washington, D.C., and the Ira Aldridge Players at Morgan State University, in Baltimore, Maryland.

Images with thanks to Witold Ceres.