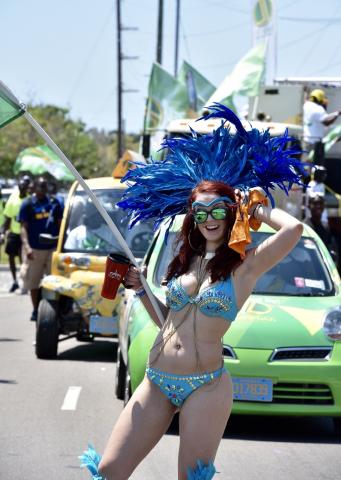 This year at Bahamas Junkanoo Carnival

Cat Island-born artist Ancient Man wowed the crowd at Bahamas Junkanoo Carnival with a spirited performance. His gangly and somewhat awkward dance moves endeared him to the spectators.

Andros native Elon Moxey’s melodic voice soothed the crowd, while D-Mac amped up the crowd during an electrifying performance of the Junkanoo Carnival theme song and other Bahamian hits.

Julien Believe got people jumping, and Visage members performed with their usual flair.

Thousands turned out over the three-day festival, and the contingent of Bahamian artists did not disappoint.

The whole idea behind Bahamas Junkanoo Carnival, according to Munnings, is to promote Bahamian culture and Bahamian music.

Other Bahamian performers included Puzzle, Qpid, Funky D, Veronica Bishop, the Blue Connection Band, Willis and the Illest, among others.

The Bahamian artists were joined on stage by a number of international artists from around the region.

“There’s been a lot of talk and controversy about our concept,” he said.

“What we attempted to do was to fuse what we call a typical musical festival with a street festival what you know as carnival or street march. We have put two of those elements together and created Bahamas Junaknoo Carnival.

“Part of that was to create a world-class platform to showcase our Bahamian artists. We had some great performances from Visage, D Mac, and various other artists.

“We created a world-class platform in the cultural village at Arawak Cay as well as on Fort Charlotte, where we projected our artists to the world. We also invited international artists to share the stage.”

Munnings said while the commission initially faced some pushback because of its decision to bring in non-traditional groups, like Cuban band Laritza, he was pleased with the outcome.

“There’s been a lot of talk and controversy about our concept,” he said.

“…Now what we have is an international music festival featuring The Bahamas.”

Also taking the stage at BJC were the Music Masters competitors and the Junkamania groups.

The winner of the Music Masters competition, FanShawn, won $20,000 and an opportunity to have her hit song, “Digg Up Da Road” recorded and produced by a renowned producer.

The winner of 2016 Junkamania (Junkanoo in a concert setting) competition is Rhythm Nation. They won $15,000.

“The idea was to create opportunities for Bahamian artists to produce more local songs, more local entertainment opportunities for themselves in an effort to restore or to rejuvenate the entertainment industry in The Bahamas, which is a major pillar in the tourism product to attract visitors and also locals to experience The Bahamas,” Munnings said.

The festival also featured performances from the Obeah Man and fire dancers. Munnings said those components are traditionally Bahamian and added to the authenticity of the show.

The BNFC is preparing to take segments of the carnival show to the Family Islands.

The first stop is Andros on Saturday.

“So this will be a national effort,” Munnings added.