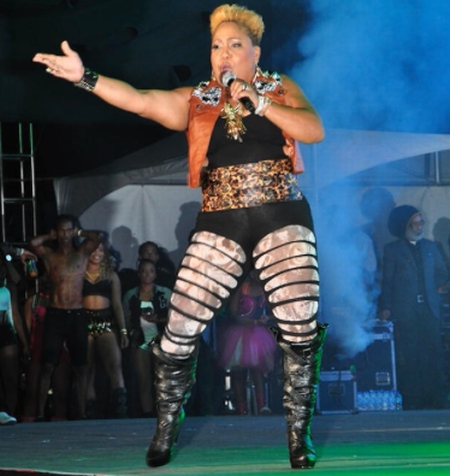 Each year Denise Belfon- known best as ‘Saucy Wow’, creates a stir with her stage show and not to mention the lyrics she usually concocts. This year is no different and as Trinidad and Tobago’s carnival heats up, the wining queen as she has been called, is readying herself to please audiences across the country more than ever before.

The semi finals of the International Groovy and Power Soca Monarch competitions take place on Sunday, February 9th at the Arima Velodrome and Belfon, having secured her space in the Groovy leg of the competition, is promising to bring it like never before. Many who’ve seen Saucy’s performances will agree that Denise never fails to truly entertain, often spicing up her show with unique gyrating techniques. To indicate that there will be more to experience is certainly a big announcement but even with that on her mind, Denise Belfon says she is a bit concerned about the festival that she loves so much- the festival touted across the world by Trinbagonians as the greatest show on earth. “Each year we encounter the same problems and as a society, we talk about it and we lament, but this year I’ve found myself wondering if we will ever get it right or if, like the steelpan, some other country will come and swoop it out from underneath us,” said Belfon. She says she is baffled by the inability of the powers that be at the various carnival foundations, to simply get it right.

Personally, Denise says she isn’t directly affected by the problems that face the carnival industry but as a key player in the business of carnival- an artiste, Belfon says she is indirectly affected and is saddened that Trinidad and Tobago’s annual show that calls for millions from across the world to visit local shores, still cannot be of the world class standard that it truly should be. ” Each year we hear band leaders complaining about the carnival route. Each year there are issues with the allocation of monies for various shows and competitions and carnival still doesn’t have a permanent home so much like a roving tent, the stage at the Queen’s Park Savannah and all the infrastructure they erect each year for the event, has to be broken down at the end of the season,” she emphasized.

Despite often delivering performances filled with raunchy expressions, Denise Belfon’s thoughts are much more than meet the eye. She values the business that brings her an income- the business that has fed her family and taken her to destinations across the world. For the love of the business, she says she will continue to do her part in creating music to fill the carnival atmosphere, however she says it’s time for the business of carnival to be taken seriously. ” This is a product that is sold to the world annually. We all have a part to play and it would be nice if the entities that control the various aspects of Carnival would come together and structure things with a goal to implementing measures that would make T&T’s Carnival the world-class event it ought to be,” said Belfon.

On Sunday at the Arima Velodrome, Belfon performs in position number 28 with her African inspired carnival track, ‘Chuku Chuku.’

Exited to stand atop the stage amid the thousands that will gather, Belfon is aiming to make it to the top of the Groovy pack and is promising an A-class performance when her name is called. She especially thanks Super Industrial Services, her kind sponsors who have outfitted her with all that she requires to make Sunday a very special day indeed. To her fans and supporters, she says, ” Get ready!”