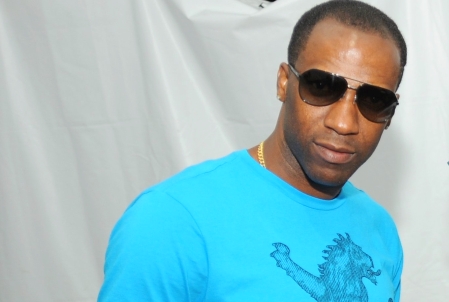 Always taking the T&T flag with him, flying it high as he believes he was born to do. ” Soca is our music, it’s what we represent and wherever I go, I am Soca. I am branded Trinidad and Tobago.” Anyone who still thinks that Shurwayne Winchester’s kidding around ahead of C2K12 had better think again. Even as he prepared for a performance in the Bahamas on Thursday night, Shurwayne was getting set to release Jiggle It ‘reloaded’ alongside the original vocalist, Inches out of Barbados.

The pair made the connection a few weeks ago and Shurwayne flew to Barbados to ensure his vocals were on point. According to Inches- real name Leroy Sobers, the final product is just what he expected to hear upon completion. “Two people approached me to do remixes before Shurwayne, but I didn’t move earlier. I came home around 12:30am one morning and I got a call, ” said the 26 – year-old artiste. He explained that on the other end of the line, he heard Shurwayne Winchester saying that he really liked the song and was interested in doing something on it. “He told me to think about it and get back to him” he said. The next morning Inches said he had to check his phone to make sure it hadn’t been a dream that Shurwayne Winchester had called him requesting a collaboration for the remix of Jiggle It. ” I couldn’t believe that it was Shurwayne,” he laughed.

The pair has since completed the reloaded version of the song, which in its original form has been gaining tremendous momentum in T&T. The remix of the track hits the airwaves on Friday, (October 14). Inches said it was a pleasure working alongside Shurwayne who he described as very dedicated to his music.”That’s why I made the decision to do the remix with Shurwayne- it was because of his attitude toward the music and his dedication to getting it done,” he conceded. This being the young vocalists’ first real opportunity to hit the mainstream carnival circuit, Inches said he’s excited about the prospects that lie in wait. “I’m looking forward to a very successful and productive carnival season. It’ll be the first time I’ll be leaving my country and the reason I’ll be traveling will be to do one of the things that I really love – music.”

Shurwayne meanwhile continues with what he set out to do at the beginning of his journey almost three years ago. At the end of October, his unit celebrates its third anniversary – a tremendous feat for a band that in the past three years has been able to produce some of the biggest singles in Soca history, among them – Murdah, Paradisin, Make It Yours with Jamaica’s Maxi Priest and ahead of next year’s festival, Harder, Wine On It, Work It and by the sound of things, Jiggle It – a huge remix that’s bound to create waves in T&T, regionally and internationally.