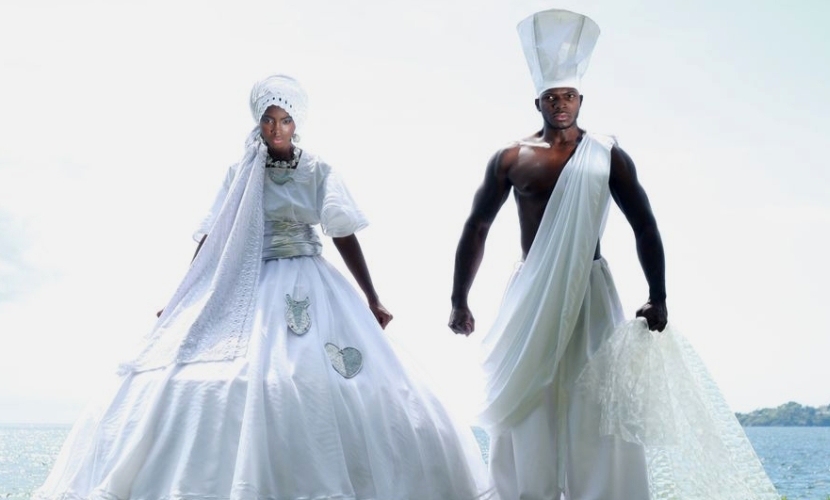 A headpiece, 6 feet by 3 feet. Light as a feather. Resembling a roman helmet and a swordfish. An evolved Minshall-type backpack- also light as a feather- housing twelve 8 foot rods to create a 10 foot lion fish man. And this massive yet graceful costume is a normal floor member of the band… Wings, samurai pants, and flags are turned on their heads and used in new ways.

All this is the exciting stuff created by a historic design collaboration between more than 8 of Trinidad’s most talented visual artists and mas artisans. The band is called SOBEIT and its presentation this year is Aqua 70/30.

The strange title Aqua 70/30 refers to ‘the Eternal Equation- Flesh to Water, Land to Ocean, Matter to Spirit, Material to Divine… 70% of the human body is water, 70% of planet earth’s surface is water. Sobeit is presenting ‘a mas’ exploring the mystery of water and its role in man’s life’…

But how did such an interesting collaboration happen? According to design partner Rubadiri Victor, “Sobeit bandleader Maurice Chevalier approached me on Carnival Tuesday last year to design Jouvay and Monday Mas for his band. I instead asked him to design the whole entity with one consideration – that I was allowed to bring in a series of young artists – and older artisans- who had been locked out of the mas. The aim is to collaborate and create a new design possibility for T&T’s Carnival. It is to his credit that he agreed to opening his Mas house to this idea, and within weeks we had begun.”

The process lasted six months- with overseas collaborators added to the mix on skype and facebook. Some artists and designers came and left, but a core remained to fulfill the objective. The end result is a band that is quietly gaining major respect for it’s taking the design of T&T mas into the future.

The result is a band that caters for all demographics with 20 sections, 2 kings, 2 queens, section leaders, special individuals, and floor members. Bandleader Chevalier says, “We’ve created designs for all kinds of masqueraders- those who love less costume and more freedom, those who want to be creative but sexy, and those who want to play mas and disappear into a character… A band should provide an arena for everyone to enjoy themselves.”

Some of the costume titles include: Koi; Manta; Lionfish; Swordfish; Turbulence; Clownfish; Tsunami; and a special section in white called Guardians of the Deep.

The band’s mascamp is located at #10 Dennis Mahabir Street, Woodbrook and registration begins at an affordable $2,500 for

a Monday/Tuesday all-inclusive, premium-drinks jump-up. Further information is available at 797-0949 and 735-7611 or online at the AQUA 70/30 facebook page or at http://sobeit.minkentertainment.com.

Breakfast, lunch and snacks will be served on the road and there will both top DJs like Joy Juice and live music on the road led by big band Mayaro along with a host of T&T’s best soca and underground musicians. “There are a lot of interesting things happening with this band and the music is another of them,” says Chevalier. Band members are also assured of a safe and secure jump up with an effective security team.

“I think that together we have created a new language for Mas that is modern and caters for the modern sensibility of the masquerader- whilst we remain perfectly rooted in the Mas- not fashion or theatre – but the Mas.The future of mas has arrived!”