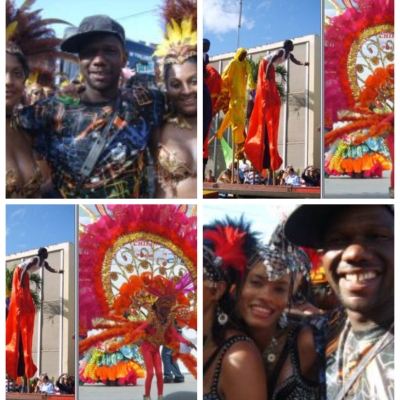 It was a good experience for my wife (Angela) and children (Rochella & Jamani) to see the level of dedication & pride that goes into preparing the Bands and artist, to create such levels of excellence, in all the shows we attended. We arrived and were met by Yohan Popwell, who took us to CLICO Sforzata Pan Theatre (The band Popwell arranged for), and it was none stop The band sounded great and we stayed until the we hours of the morning.

The following day we visited the Kalypso review tent, that was a great show, with the backing band jamming sweet sweet Kaiso, it was nice to see Baron as well as sugar Aloes and many other artist perform , finishing off with none other than Uncle Crazy. After leaving the Review I could not help with catching up with some old friends at the Neal & Massy Trinidad All Stars Pan theatre, this was about 1.30am and practice was in full swing.

The Saturday was very compacted with us visiting the Children’s King & Queens competition, this show was amazing to see the age groups of the children and size of the costumes they were wearing. It is so great to see how generations & generations have been carrying on these traditions from such a young age.

After resting for a bit, it was time for PAN!!! We attended the single Pan semi finals, this was as usual a great vibe of bands upon bands, the whole area was ringing to the sound of Pan & more Pan. later on we met up with good friends from All Stars Daniel & Chappy who was on there way to All Stars Rehearsal so we went along, All Stars were really sounding great, We had some Bake & Shark and a few Stags & Carib ( The Children had sweet drinks) the food and music was like heaven. by then we had lost track of time. Yohan reminded us that we have a long day ahead of us Sunday “Panorama semi finals” so we best get some rest.

We arrived at the Savannah for Panorama semi finals about 10.30am and the place was just buzzing with People some bands setting up, some were already practicing, and we knew it was just going to be a full day of none stop Pan music, as the day went on more bands were setting up, cause first they had the small band category, then the medium, then the Large bands, this was just great food sunshine & Pan music, any Panist dream.

Yohan’s Band CLICO SForzata played really well, as the day proceed I was bumping into old friends that I had not seen for some Time, Robert Greenidge, Boogie, Jit Samaroo, earl brooks, & lots more, they were all glad to see us, & gave Jamani some good solid advise about Pan, Ray Holman was really surprise to see how much Jamani had grown, because the last time Ray saw Jamani was when we played together in Birmingham, and he came to my house, Jamani was about 3 years old, and was playing his drums for Uncle ray. Ray at time commented on how Jamani has a real good sense of rhythm for his age.

As the evening moved on the Big Guns were really intense, Exodus presentation look really good & sounded good, My brother Norman Pan Maestos kept on sending me text messages from England telling me to watch out for Phase II, but my Heart was with All Stars & Despers. When I heard Robbert Greenidge’s arrangement of The Ten commandments of Pan with Despers it hit me in my soul, something said Oh Gosh ‘Despers’ music from the Hills, But All Stars was the band for the Night, full of Vibes & energy. After there performance you just knew without a doubt they had to come first.

The Monday was more Pan with the Schools Panorama finals, this was excellent to see the young players, playing to such a high standard Rochella & Jamani really enjoyed this event, which was also held at the queens park savanna.

The Monday night we went to the Calypso tents clash at the National stadium this was also a great show, they also had the Yangatang tent with jokes till yuh belly buss, and it was great to also see the Mighty Sparrow perform, and know that he is still going strong.

The Days were going so fast, by the Wednesday we were at the customs fete, this was also a wicked show, with Machel Montano, Bungi Garlin, Roy Cape, Sherwin Winchester and many more artists, this was just non stop bacchanal!.

The early hours of Friday morning , 4.30am we went to All Stars Pan yard for the Canboulay, this was moved to the corner of Duke street, and was a brilliant presentation of Bois Battalions stick fights on duke street port of Spain in 1838, to see what people of Port of Spain Trinidad had to fight for to allow us to have Carnival today. This ended up like a mini Jouvay, with Freelanders Steelband playing.

That Friday morning went straight into Mass and costumes & bands galore Carnival Friday the Sun was beating down and the music tempo was sweet, they even had Tamboo bamboo bands jamming on the streets, this was great to listen and see, and know this was responsible for the birth of Pan.

Panorama Saturday was great, after visiting the Kiddies Carnival we went down San Fernando for Panorama finals it was nice in the stands to watch the bands, all the bands played well, All Stars was our favorite, but the judges saw it different, what can you say, that’s life.

Carnival Sunday was another magnificent show with the King and Queens, really amazing and the calypso were quite good, we felt Sugar Aloes was a clear winner.

After Dimanche Gras as you know we only had little time to rest and get ready for 4.am the start of Jouvay, where Yohan brought us to all stars and we were in paradise, Carnival Monday we were all tired but kept on going, till about 3.pm by now we were on our last legs but knew we had one more day to go.

Carnival Tuesday was like being in heaven, we started the day with All stars played sailor mass plenty of white powder, then enjoyed the costumes and mass, by late evenings we found ‘Despers; and heard more sweet pan until we reached the corner of duke street and ended back at All stars Yard. Another Day of Great Pan Music. Highly recommended for the soul.

Ash Wednesday myself & Jamani was very privilege to perform on community date line for Alison Henercy along side with Dane Goulston “tenor soloist from Trinidad All Stars, they were very impressed with the work we our doing over seas with pan. Then it was time to chill out at the for the beach.

But we can all say that Trinidad Carnival is definitely the greatest Show on earth, and the Land of Pan & Calypso.