Home > Eco > You Reap What You Sow 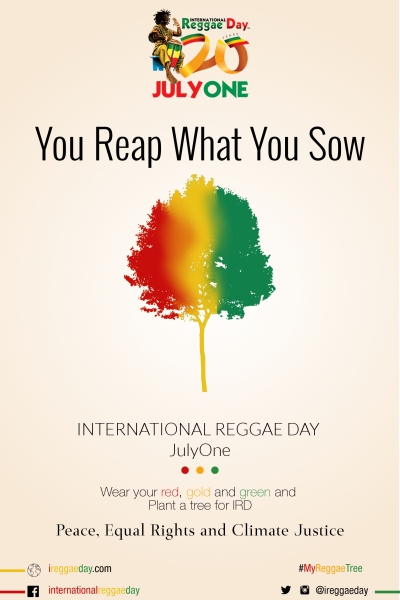 There are many Jamaican proverbs that hold timeless truths but perhaps none more profound as “You Reap What You Sow”. Chosen as the theme for International Reggae Day 2014, the festival will feature a conference by the same title on June 30th at Jampro which will present sessions on Social Design: The Power of Art to Transform Space and Copyright Term Extension: Preserving the Past and Protecting the Future. The conference is sponsored by JAMMS, International Reggae Poster Contest, JIPO, KOOL FM, Jampro and JTB and will feature speakers from the visual arts, music industry and IP organizations.

The annual JulyOne festival includes an environmental call to action for Reggae fans around the world in celebration of great Jamaican music on JulyOne. The global Reggae party invites nations to unite for peace, equal rights and climate justice and plant a tree for IRD.

The IRD Plant a Tree campaign began in 2010 with the planting of two Blue Mahoe trees inside Emancipation Park in the heart of Kingston. IRD has been inspired to continue as an annual activity by the work of the late Kenyan environmental activist and first African woman Nobel Peace Prize Laureate, Wangari Maathai and the UNEP’s Seven Billion Tree campaign.

IRD JulyOne Plant a Tree social media campaign adds Reggae’s voice to the global green movement and will be highlighted by strategic tree plantings in Jamaica including Emancipation Park, Hope Zoo and the Climate Change Park. The IRPC IRD Global Reggae digital exhibit experience will be the culminating feature on JulyOne as it will be projected onto the wall of the Jamaica Pegasus and shown in all official IRD parties from Kingston to New York to Waikiki and throughout the Caribbean at participating Sandals Resorts.
http://www.reggaepostercontest.com/

The Creative Kingston Music Mural Movement will be launched on IRD with a series of murals produced in collaboration with a team of artists from the Edna Manley College led by Taj Francis and Matthew McCarthy and joined by artists from the Jamaica Designers Association.

The JulyOne launch locations are Alpha Boys School, UWI, Downtown and What’s On Café in Grants Pen which will host a live mural music party on June 30-­‐JulyOne as the artists create two new murals live for social media. The IRD ‘20-­‐4-­‐20’ Compilation featuring artistes from Jamaica and around the world, will be released digitally on I Tunes on JulyOne along with a number of other music projects being released on IRD including:

IRD encourages Reggae lovers around the world to plant a tree on JulyOne in the name of Reggae and contribute to the One Billion Tree Campaign as IRD’s You Reap What You Sow campaign supports the fight for equal rights and ‘climate justice’.

Wear your Reggae colours, listen to your favourite Reggae music, donate to the Alpha Boys School Project and send us photographs of your planting activity on JulyOne – whether you plant alone in your garden, as a family or as a part of a broader group: every tree counts.

Honouring the life and work of Professor Wangari Maathai