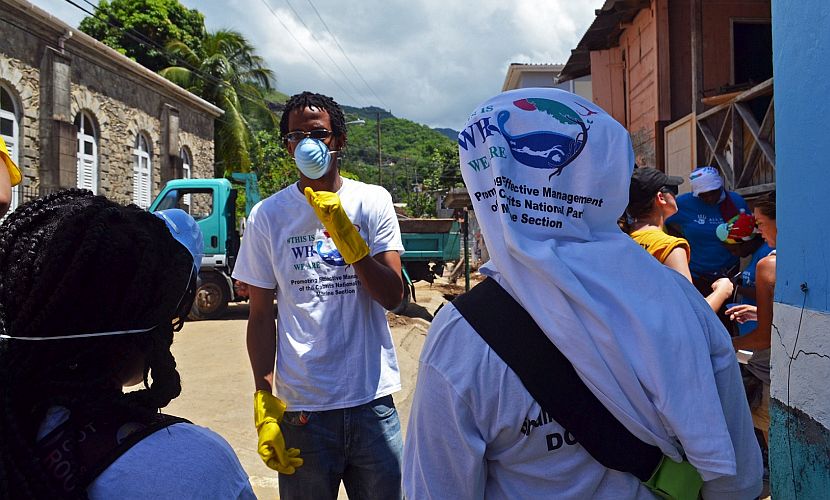 The video is Grenada’s final push to win a regional contest to spread awareness about the importance of the sea that both separates and unites Eastern Caribbean islands.

“We don’t really have a choice, we’re all coastal people,” says Alleyne Regis of PCI Media Impact, one of the organizations running the contest along with The Nature Conservancy. “When we want to relax, we have a beach barbeque or go outside somewhere to connect with the environment.”

Lately, the tide of public awareness is changing. This shift in the current comes from vibrations and celebrations in Grenada right up to Saint Kitts and Nevis, where people are getting creative about protecting coastlines.

Six countries, including Antigua and Barbuda, Dominica, Grenada, St. Kitts and Nevis, Saint Lucia and St. Vincent and the Grenadines, are competing to create the best campaign that promotes the importance of protecting the marine life.

Motivated by friendly rivalry and national pride, the campaigns move to the pulse of their own remix of the contest’s theme song, “This Is Who We Are,” and include activities from movie nights to fishing tournaments. Watch Antigua and Barbuda’s music video here and stay tuned for Grenada’s.

On November 18th, the campaign teams will gather for an Award Ceremony at Cabrits National Park in Dominica – on the rise after Tropical Storm Erika.

Only one team can claim the first place trophy, presented by Minister of Agriculture and Fisheries, Hon. Johnson Drigo, but when the rivalry fades the campaigns will continue as a unified network.

Each team will share their costume designs, invasive Lionfish recipes and successful strategies in order to make sure the real victors are the beaches, reefs and mangroves – and most importantly the people who rely on them.

The Ceremony takes place in the weeks before COP21, a meeting in Paris that will redefine the world’s climate strategy. Though the Caribbean lacks a mighty voice on the global stage, coastal people feel the impact of sea level rise at their doors.

Public awareness is just one way the islands are strengthening their communities. Government officials, tourism authorities and fishing cooperatives are collaborating to sponsor sustainable livelihood initiatives and make smart management decisions that change the way we use, respect and celebrate coastal resources.

The campaigns are part of the Climate-Resilient Eastern Caribbean Marine Managed Areas Network (ECMMAN) project, sponsored by the German Federal Ministry for the Environment, Nature Conservation, Building and Nuclear Safety.