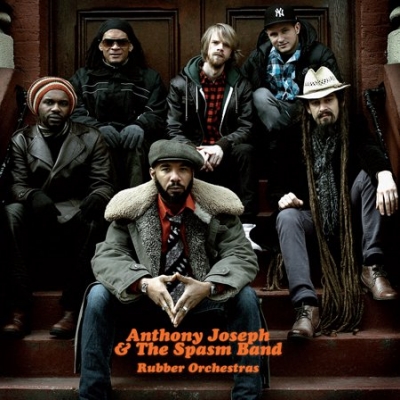 Third album from poet and musician Anthony Joseph and his band

Third album from poet and musician Anthony Joseph and his band, produced by Malcolm Catto (The Heliocentrics) & featuring Jerry Dammers. Anthony will also be bringing out a new book of poetry of the same title on November 15th, published by Salt Publishing.

There will be an album launch at the New Empowering Church in Hackney on Nov 11th (great Afrobeat venue!). The album was produced by Malcolm Catto of Heliocentrics and also features one fabulous track produced by Jerry Dammers (of The Specials fame).

With a title inspired by lines from surrealist poet Ted Joans, Rubber Orchestras is the stunning new album from poet and musician Anthony Joseph. A mesmerising mix of funk, jazz, rock, Afrobeat, soca with Joseph’s distinctive vocal delivery, skilfully produced by drummer and leader of The Heliocentrics Malcolm Catto and including one very special track arranged and produced by Jerry Dammers.

The opening words on the new album ‘The griot is the sound of universal culture’ are key to understanding the universe of Anthony Joseph, born in Port of Spain but London-based for many years. Having carved out a highly successful career writing and performing poetry (and teaching), as well as recording and performing with his band The Spasm Band, one would be hard pressed to think of any other present day performer doing something akin to what Joseph is doing on Rubber Orchestras. Anyone who still treasures a copy of Axis Bold as Love by Jimi Hendrix will recognize some aspects of the vocal delivery, mix that with a bit of Benjamin Zephaniah, Bob Marley and Sly Stone and you already have a rough idea of the vocal timbres.

Musically, Rubber Orchestras is rockier and more melodic than previous albums, the title also referring to the range of different atmospheres and grooves present on the album, on which new Cuban rhythms give a more ‘calypso rock’ overlay to the ‘voodoo funk’ base. The decision to use producer Malcolm Catto came about through a mutual love of 70s music and Catto’s extensive knowledge of analogue sound. Several members of Catto’s band The Heliocentrics appear on the album, as well as Catto himself on percussion, plus Shabaka Hutchings on clarinets and trumpeter Robin Hopcraft. There are also the deep, warm vocals of singer Jasnett Lindo that underscore this new, more melodic direction.

Last but not least, Jerry Dammers (with whom Anthony Joseph has been playing for years in The Spatial AKA), has also come to the banquet. The legendary founder of The Specials, one of the most important UK bands of the late 70s and early 80s, took to the controls to arrange and enhance a visionary and revolutionary poem, the iconic suite called ‘Generations’. A stand out track on the album, the lyrics talk about Joseph’s relationship to his homeland and its history through his ancestors. They struck a chord with Dammers and his beautifully sparse arrangement with understated vocals marries perfectly with Joseph’s words.

In 2004 he was selected by renaissance one, Decibel and the Arts Council of England as one of fifty Black and Asian writers who have made major contributions to contemporary British literature, appearing in the historic Great Day photo. In 2005 he was selected as the British Council’s first Poet in residence at California State University, Los Angeles.

Anthony and The Spasm Band released their debut album ‘Leggo de Lion’ in 2007, followed by ‘Bird Head Son’ in 2009, and now Rubber Orchestras in October. As well as all this creativity, he also lectures in creative writing at Birkbeck College, University of London.