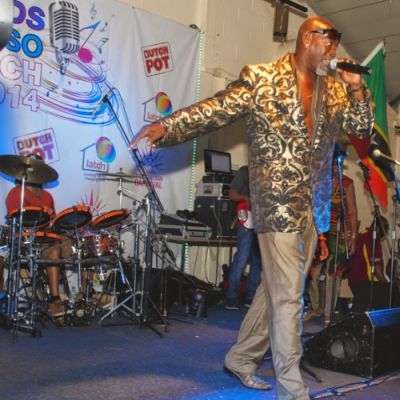 A King has no Honour in his own Country

It was on August 24th whilst in London and being interviewed by Chris Collins of VibesFM radio in Sheffield, via a telephone hookup, that King Socrates, a multi crowned Calypso Monarch of St. Kitts & Nevis, first told the public that just fourteen days earlier, he had been flown to Antigua to receive a lifetime achievement award for his contribution to the development of the Calypso art form.

The Chris Collins interview was mainly about King Socrates’ performance and reception the night before, at the West Indian Centre in Leeds where he was one of three guest performers. The other two being The Mighty Tunda of St. Kitts and King Astro out of Nevis.

Both Socrates and Chris Collins were in agreement that kudos was due to Ms. Dianne Fleming, and The Leeds Carnival Committee for pulling off the most successful and best attended Calypso competition in a long time.

The chit chat got a little more interesting when Socrates, asked Chris Collins who hails from New Town in Basseterre, St. Kitts. Why isn’t there a street named after King Ellie Mat, The Federation’s most celebrated Calypso Monarch and cultural icon, and why did it take another country to recognise his, ‘Socrates’ own contribution of over forty years, to the development of Calypso.

While Chris promised to look into it, these were the questions that prompted me to investigate further the claims of King Socrates and this is what I uncovered.

It was an evening that saw trophies, honours and awards given to some nineteen persons, (some posthumously), who had contributed to the cultural footprint of Antigua & Barbuda and the wider Caribbean in general.

The question is, how did King Socrates of St. Kitts end up on this year’s awardees list, to be honoured amongst Antigua’s icons like the Late Great, Mr. Oscar Mason, Mr. Kenneth (Tennyson) George,
Mr. Barry(Scorpion) Edwards and others.

What is his contribution to the development of the Calypso art form in Antigua & Barbuda and why is he the first non national to receive such an honour.

Socrates is the founder and operator of the Legends Calypso Tent that showcases over twenty-five Calypsonians annually and has now become a fixture on the annual carnival calendar of events for the past fourteen years.

Five years ago he was asked by Ms. Adelza ‘Lypstic’ Sheridan, president of WCAI to host and give exposure in his Calypso Tent, to some of Antigua’s lesser known, and up and coming Calypsonians.

Since then, with the assistance of his tent sponsors such as S. L. Horsfords & CO. LTD, LIME and The Carib Breweries, Six of Antigua’s Calypsonians were able to travel to St. Kitts and gain exposure during the annual carnival season and plans are afoot to host three more in The Legends Calypso Tent, this carnival.

The reading of his Bio by Master of Ceremony Mr. Nat Francis, highlighted Socrates’ many achievements in Calypsodom during his long and illustrious career as a Calypso Monarch, songwriter, band leader and calypso tent organiser but it was his unselfish nature in reaching out and assisting other Calypsonians along the way, not only in his native St. Kitts & Nevis but especially in Antigua & Barbuda also.

This was Antigua & Barbuda’s way of saying ‘Thanks to King Socrates’ in a very meaningful way by conferring upon the winner of seventeen Calypso Monarch titles, a lifetime achievement award.