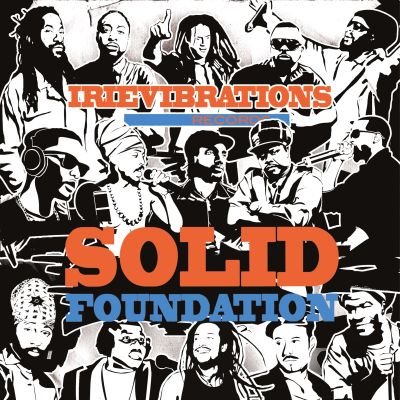 The latest from Irievibrations – Solid Foundation

In 2009 the uprising Austrian Reggae-Label Irievibrations Records released their first label compilation ‘Still One Drop’ – now they are back to present the second edition entitled ‘Solid Foundation’. A decade of experience in the music business and over 80 releases of various international Reggae & Dancehall artist have made Irievibrations a trademark for genuine and modern sound, independent from major label structures, mind-sets and changing hypes.

The album represents a diversity of styles, such as Roots, Rub-A-Dub, Digital Bashment and Dancehall. The first single „The Journey“ by Dancehall Superstar Konshens was a hit in summer 2014 and raised the expectations for the upcoming long-player.

Furthermore ‘Solid Foundation’ is the soundtrack for the simultaneously published documentation “Studio Chronicles – Jamaica”, a documentary series about the history and culture of recording music in Jamaica. In co-operation with Dreama Studios and Illuminati Productions, Irievibrations Records created a series of five episodes that feature legendary producers like King Jammy or Don Corleon, studios like Harry J or Anchor, as well as recording artists like Sly Dunbar, Junior Kelly and Konshens, just to name a few.

The documentation provides an in-depth look into the daily work of the mentioned producers and an interesting insight into the historical development of recording technology, as well as different approaches to recording music in times of digitalization. The aim is to draw attention to the hotspots in the Jamaican music history and it´s rich musical heritage that has a worldwide impact until today.