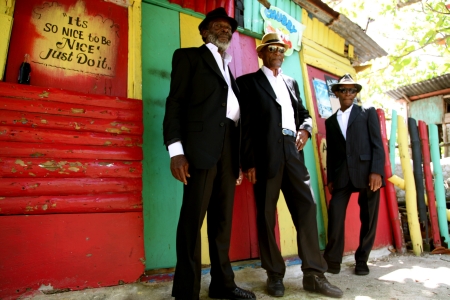 Great Expectations from the Jolly Boys

Jamaica’s legendary Jolly Boys will release a new album, ‘Great Expectation’ on Wall Of Sound/Geejam Recordings on 13th September 2010. It’s a collaborative project between Geejam’s Jon Baker and Wall Of Sound’s Mark Jones and the result is 12 stunning interpretations of contemporary songs given a mento makeover. They will also be in the UK for a series of rare UK dates throughout the summer months.

While Jamaica is known for its reggae and ska, it is mento that is the original sound of the island and the forerunner to these two musical genres. With an amazing history spanning 60 years The Jolly Boys’ name is synonymous with the mento sound and they are undoubtedly the most recognisable mento band in the world.

The Jolly Boys quickly rose to local prominence in the 1950’s as the house band for the Rat Pack’s Jamaica chapter, chaired by the swashbuckling enfant terrible Errol Flynn. Singing songs of double entendre and ribaldry to those in search of escape and excess, the group served as Port Antonio’s go-to band for thirty years.

The band have continued in different incarnations throughout the years and have a truly charismatic leader in current front man Albert Minott who in his younger years used to entertain at Jolly Boys’ shows with his hand walking, fire eating and limbo dancing. His saturated vocals, natural retro chic stylings and limitless charisma convey a rare originality and musical creativity that is entirely his own.

‘Great Expectation’ was produced by Baker, founder of Gee Street Records, the seminal UK hip hop label that first brought the likes of the Jungle Brothers, Queen Latifah, PM Dawn and the RZA to the attention of the British public and that also developed a domestic roster with acts such as the Stereo MC’s, and DJ Richie Rich. Now based in Jamaica, Baker recorded the album at his Geejam studios in Port Antonio. It was mixed by Tom Elmhirst who has worked with such luminaries as Lily Allen, Amy Winehouse, Mark Ronson, Hot Chip and The Kills.

In the summer of 2009 Baker held a recording session at Geejam to capture some of the Jolly Boys vintage material. That session led to a fresh creative idea – to dip into the rock repertory, take the songs that resonate with mento’s raucous history and give them a different vibe. Baker, together with his long time friend and creative partner Mark Jones, chose tracks from artists like The Clash, The Stooges, The Stranglers, New Order and Amy Winehouse. Over several months the group worked incessantly with Baker’s co-producer Dale Virgo on a set of innovative arrangements and modern beats to compliment and contemporise an older sound defined by banjos, maracas and rumba boxes.

The result is ‘Great Expectation’, the birth of modern mento.

The Story Of Lovers Rock