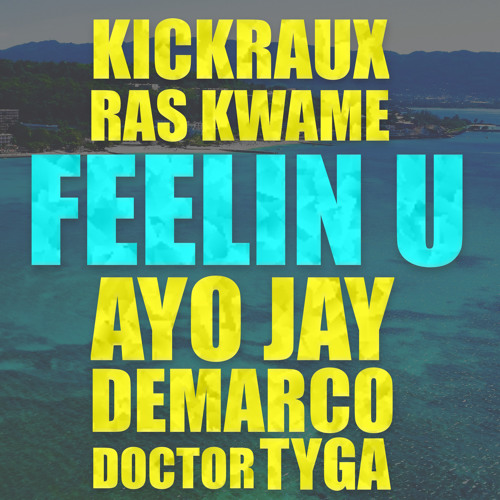 Eclectic DJs/ producers, KickRaux and Ras Kwame, link up on their new single ‘Feelin U’, where they infuse global sounds unique to Africa, the Caribbean, US and the UK. Jamaican native KickRaux brings a flavour of Bashment vibes that entwine with the uplifting and feel good features.

The anthem features heavyweights such as Kanye West’s newest signee Tyga (US), Demarco (Jamaica), Ayo Jay (Africa) & Sony Music’s newest signee Doctor (UK) and since its premiere via Billboard, has built in to a viral smash, making it’s way into DJ sets across the world, becoming one of the biggest songs for the dancefloor & in radio mix shows.

‘Feelin U’ is the debut single from the forthcoming KickRaux (FOREIGN XCHG) & Ras Kwame’s (Orange Hill Productions) collaborative album ‘Forward’ which explores the full range of dancehall & soca influenced sounds and unique collaborations between talent from the worlds of Reggae Dancehall, Hip Hop, R&B and Afrobeats. Responsible the official remix of Kranium’s “Nobody Has To Know” alongside Major Lazer, DJ KickRaux spoke to Billboard about the collaborative album “He’s (Ras Kwame) from Ghana and I’m from Jamaica so we came up with the concept of bringing together all of the sounds of the Caribbean, afrobeats, soca and electronic music in one project.”

Expect some sizzling collaborations and show stopping names to come out of the bag over the coming months but until then, take in the feel good vibes from this weighty debut joint.