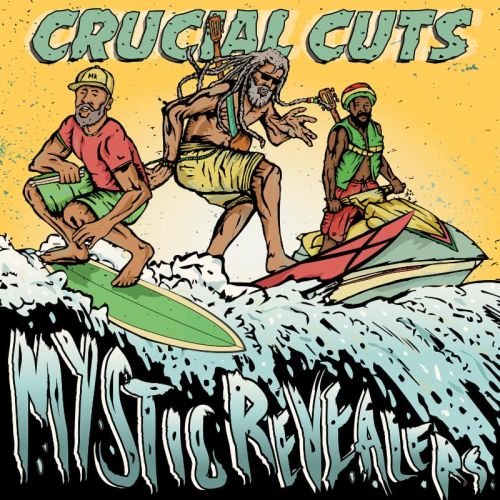 2015 Tour Dates To Be Announced

In a World Where Surfing, Skating and Roots Music Collide. Head east out of Kingston, Jamaica, past the city’s industrial waterfront and Norman Manley International Airport, and you’ll come upon the community of Eight Miles Bull Bay. There, along the beach, you’ll find Jamnesia, one of the most unique and eclectic outposts on an island that’s world renowned for such places. Equal parts community center, surf school, skateboard park and music venue, the one-of-a-kind hub known as Jamnesia is the homebase of guitarist, vocalist, surf legend and soap opera star Billy Wilmot and the famed Mystic Revealers.

After a nearly 15-year hiatus, the iconic band Mystic Revealers reunite to tour and release new material in 2015, introducing their music to a new generation. The group’s latest collect Crucial Cuts (available Jan 13, 2015 on VP Records new Dub Rockers imprint) gathers key tracks from the band’s 20-year catalog. The songs date back to the ’80s – including “Young Revolutionaries,” “Rasta Man,” “I’m Gonna Tell Ya” featuring Anthony B and the Sizzla collaboration “Tell Them.” In a nod to their other passions, the cover depicts founding members Wilmot, Edwards and Henry on surfboards and jet skis.

Three decades after their earliest single releases, the band’s message remains exactly the same as it did when Wilmot, Edwards, Henry and Davis first came together near the shores of Bull Bay. “We are like a postman sending a letter,” Wilmot says. “We might not be the ones who wrote the letter, even though the songs are ours. The messages being transmitted are from the Almighty-messages of love, honor, truth, justice and unity.”

Following Crucial Cuts, Mystic Revealers will release their brand new single on February 3, 2015, entitled “Herb Must Legalize Now” featuring one of reggae’s most talked about artists Chronixx, who got his start at Jamnesia.

Jamnesia has also become a crucial incubator for the latest wave of Jamaican music talent. Live sessions hosted on the premises provided an early point of exposure for the stars of reggae’s current roots revival. In addition to Chronixx, a new generation of talent like Protoje, Jah 9, Jesse Royal and Kabaka Pyramid frequent the headquarters.