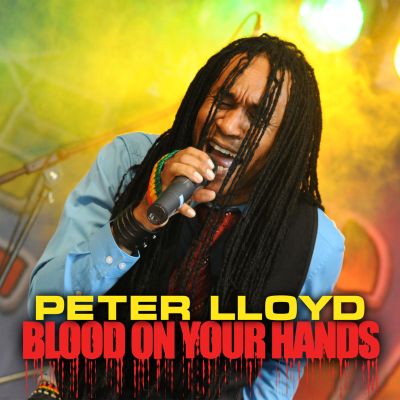 International reggae star Peter Lloyd’s Blood On Your Hands has landed in the coveted number one spot in beautiful reggae island Jamaica, on CVM Tvs’ E-Strip HitList national chart, as of Friday May 29, 2014.

The Blood On Your Hands track had previously spent two weeks in the number one position on the Bess FMs Evolution Culture chart, and is currently, climbing music charts across the globe including The Jamaica Weekly Count Down Chart’s Top 25 Reggae singles at no. 14, the New York Foundation Radio Network music Chart at no. 6, Die Reggae Charts at (Russia) no. 14 ,Reggae In The Fields Top 25 Reggae singles on CKCU FM 93 Ontario at No. 3 (Canada).

Peter Lloyd’s Blood On Your Hands has been receiving tremendous attention from radio and video music programs, and is a growing presence on mix tapes and in the dancehalls across the world. The song’s catchy hook and powerful uplifting social commentary has resonated with listeners globally. The Blood On Your Hands track was produced by Dean ‘Canon’ Fraser and Peter Lloyd for the BlackLight Records imprint.

The song was written by Peter Lloyd and is currently available on internet outlets across the worldwide web. The number one track is taken from Peter Lloyd’s highly anticipated third full length studio album tentatively titled ‘The Love Messenger Returns’. Blood On Your Hands is Peter Lloyd’s first single in many years and the artist is happy at its impact.

"It’s wonderful that the world is gravitating to Blood On Your Hands in such a positive way. I have much more to say regarding our social, political, and economic state", Peter Lloyd said.