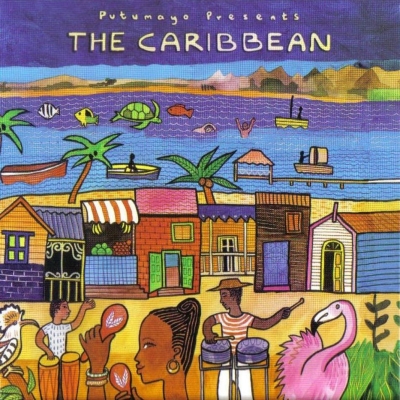 This CD brings a joyous musical cruise to the Caribbean featuring the irresistible rhythms of soca, reggae, merengue and more.

Turn on the radio and there’s a good chance that you’ll find sounds of the Caribbean permeating the airwaves. From reggaeton and dancehall to soca and salsa, its influence is everywhere. Caribbean music is steeped in African traditions, incorporates European and Latin American sounds, and satisfies virtually any listening palate. With the pop charts currently reflecting love for these genres’ growing appeal, Putumayo World Music’s new collection – The Caribbean – delves into the roots of the music, its present and its future.

Chart toppers No Doubt, The Mighty Mighty Bosstones and others owe much of their success to Jamaican legends The Skatalites, who helped pioneer and popularize ska around the world. Their contribution to the album, ‘Freedom Song,’ shows influences of American jazz, swing, and rhythm and blues, as well as Trinidadian calypso and Jamaican mento.

Mento, a Jamaican folk style that is a predecessor of reggae, has been widely championed by Stanley Beckford. An underground legend, Beckford grew up singing in his church choir and winning talent competitions. Now in his 60s, he has experienced a career revival after recording two critically acclaimed albums for French major labels. His cover of the mento classic “Sam Fi Man,” (Jamaican slang for “con man”) warns of those trying to pull a fast one.

Breakout star Mika mixes the compas music of his native Haiti with influences of calypso, R&B, reggae and pop to create a gentle breezy groove. After attending college in Montreal, Mika recorded a hit song that quickly established him as a leading figure in the compas scene, and has just released his first solo album. On ‘Bel Fanm’ he sings of Haiti’s beautiful women.

Militant is quickly joining Sean Paul and other Caribbean stars with crossover appeal. This new artist struts his stuff on the track ‘Hot & Groovy.’ Using a sample from Putumayo recording artist Habib Koite’s song ‘Saramaya,’ Militant creates a quintessential soca party song that has erupted as an enormous hit in the Caribbean.

The Caribbean party flavor of newcomers Jab Jab will also have audiences dancing. Based in Montreal, the band is a unique discovery and their song was added to The Caribbean even though they are still relatively unknown in their native islands of Trinidad and Grenada. They were discovered on a three track demo acquired by Putumayo’s Jacob Edgar. A song of true soca origins, ‘Rev It Up’ does just that with a live brass section.

Although most of the artists appearing on The Caribbean have experienced limited fame, all deserve wider recognition. Discover why Martinique’s Kali and Marcé & Toumpak have deep-rooted local celebrity status and why Ska Cubano, whose mix of Jamaican ska and soulful Afro-Cuban son, are gaining stardom in Europe. The Caribbean has long been a bastion of musical innovation and The Caribbean shows that today’s artists are continuing to build on its powerful musical heritage.

A portion of the proceeds from the sale of this album will be donated to Wyclef Jean’s Yele Haiti charity in support of their development efforts in Haiti.