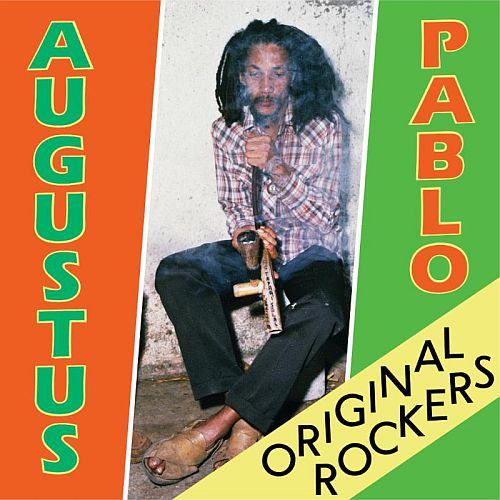 The original 1979 Greensleeves ‘Original Rockers’ compilation was instrumental in bringing the music of Augustus Pablo to an international audience and with this 23 track set we pay tribute to that landmark release with a crucial selection of further cuts of the original albums classic rhythms including some rare sides making their album debut.

The official deluxe edition includes sleeve notes courtesy of Noel Hawks and is made with full approval of the original compilers.

“We were enthusiastic about Augustus Pablo at the time and he was becoming more well known so we just thought it would be nice to have a compilation of some of the music that had really impressed us in the previous four or five years. So they’re old records in one sense but, having said that, those rhythms were still very fresh sounding. And one of those things about being enthusiastic is wanting to spread the word…” Chris Lane

“I took the box of 45’s round to Chris Cracknell’s and this box of 45’s were, to me, probably the most personally valuable thing that I owned at that time and then we recorded them on to a reel to reel Revox and I sequenced them in an order that would… hopefully… impress Chris and Chris. I didn’t just pull them out of the box randomly… as I recall. And I played them in an order that would have a sense of flow… dynamically… but I remember always being surprised that the order I’d laid them down in was exactly the way they came when the LP finally materialised.” Dave Hendley

“Dave put the record together and I did the sleeve notes. We took the photos in the back of Greensleeves shop in Shepherds Bush… they’re my records that cigarette smoke was blown all over while Jean-Bernard was photographing them. We were trying to get a cloudy, mystical effect but I’m not sure if it really worked out like that! But it was Dave’s compilation…” Chris Lane

Pablo also sent up alternate dub mixes to ‘Tubby’s Dub Song’ and ‘Brace A Boy’, which could not be included due to reasons of space on ‘Original Rockers’, but both are featured on this release. It’s next to impossible to sum up the concept, stark elegance and appeal of Pablo’s music in words but Dave and Chris, who were writing about this music when it was actually being recorded and released, come very close.

“This was a body of work that was, and still is, absolutely musically unique and still sounds incredibly contemporary. I know people have hyped up the dub thing and Tubby’s influence on this, that and the other and the whole concept of remixing but no-one has ever, ever improved or come even close to creating the audio experience you got from listening to those Pablo tunes… particularly the dub sides. They just put you in another place and dub is very much about what’s left out as about what’s put in.

But the musicality of the way those sides are mixed is absolutely extraordinary… it is genius… it’s one off genius. King Tubby to me is up there as a unique innovative character with Miles Davis and Jimi Hendrix… someone who really pushed the boundaries of the artistic areas they were working in.” Dave Hendley

“I see dub different to how everybody else see dub, you know. Everybody have their own view about dub. Some people say to me in an interview that me invent dub. But me no invent dub! You understand? ‘Cause I don’t want it to look like some swell headed thing or I look some title!

It was a whole class of us together… dub is really drawing out the rhythm. Right? That’s what them call dub and you echo it. But some people give different meaning for dub…

….dub was a part of the whole thing them times…it became like you feature the musicians!”
Augustus Pablo