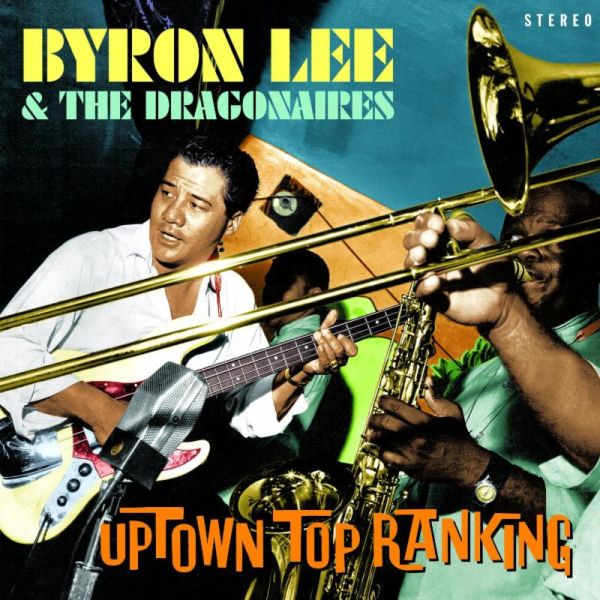 This is Byron Lee – This is Uptown Top Ranking!

Next month VP Records will release Byron Lee & The Dragonaires’

Uptown Top Ranking, a collection (available together for the first time) of 20 classics from the legendary Jamaican band. The group mastered multiple musical genres – including ska, rocksteady, soca and calypso – and played a key role in expanding its presence beyond the Caribbean. Culled from the extensive Dynamic Sounds catalogue, the selection demonstrates why Byron Lee was one of the most influential Caribbean recording artists for over 50 years. The songs, which are mostly rare gems and classic hits ranging in style and decade, are perfect for collectors of reggae, vinyl and oldies.

The CD component will be accompanied by a double vinyl in gatefold packaging to celebrate the vitality of the LP format as well as these recordings. Filled with testimonials from the Byron’s widow Sheila Lee, Dragonaries’ band members and fellow artists like Bunny “Striker” Lee, the album has extensive liner notes documenting the band’s historical and significant importance in Caribbean music.

Byron Lee and the Dragonaires played a crucial pioneering role in bringing Caribbean music to the world. Originally formed in 1950, the band got their start performing at the island’s local hotels, also incorporating American pop and R&B covers in their repertoire. The band appealed to the uptown “middle class” crowd of Kingston, Jamaica and tourists visiting the area. In the early 1960s, they were one of the first major ska bands to break on an international level – landing a on-screen performance role in the first James Bond film Dr. No. In 1964, they received another boost when they were selected by the former Jamaican Prime Minister Edward Seaga (then the island’s head of Social Welfare and Economic Development) to perform as a backing band for a showcase of Jamaican talent (including Jimmy Cliff, Prince Buster, and Millie Smalls) at the New York World’s Fair.

After this success, Lee took the band in a new direction, incorporating calypso. They began performing regularly at Trinidad & Tobago’s carnival and also touring the Caribbean and North America. Lee also bought WIRL studios from Seaga and turned it into Dynamic Sounds Recording Company. Dynamic became a major hub for recording not only local talent like Toots & the Maytals and John Holt, but also international acts like Eric Clapton, Joe Cocker, Elton John, The Rolling Stones, Paul Simon, Stevie Wonder and Roberta Flack. Byron’s two sons, Edward Lee and Byron Lee Junior, took over much of the day-to-day running of Dynamic Sounds in the 1990s, and Byron Lee & The Dragonaires never stopped touring.

In October 2008, Bryon Lee passed away after battling cancer. On the day of his death, Bruce Golding, the Prime Minister of Jamaica, stated “Jamaica, and indeed the world, has lost another great music pioneer with the passing this morning of Byron Lee one of the greatest band leaders ever to grace the entertainment stages of the world.”

Excerpt from sleeve notes courtesy of Harry Wise
“There are usually more than two sides to every Jamaican record: keeping it real or selling out, uptown and downtown, dreadlocks and baldheads, society and sufferers, authenticity and commercialism. But it is never black and white, never ever that straightforward and, the closer its history is examined, the more complex and contradictory the narrative becomes. The initial two sides become increasingly multifaceted when recounting the particularly Jamaican success story of the inexorable rise of Byron Lee & The Dragonaires and Dynamic Sounds.

From shuffle & boogie via the cha cha cha through the birth of ska, rock steady and ‘reggay’ and on to the first hints of dub, Byron Lee was more interested in stereo than stereotypes. As “a member of Jamaica’s middle class Byron Lee was able to gain credibility with the wealthier members of Jamaica’s population” and, in doing so, he “helped to build the careers of dozens of the island’s most talented vocalists” and built “Jamaica’s first multi track recording facility”. His Dynamic Sounds Recording Company produced many classic records under their own auspices while simultaneously enabling a plethora of producers, artists and musicians to make and manufacture their own records by using his world class resources.

This set is not a collection of Byron Lee & The Dragonaires’ greatest hits, which are readily available on a number of excellent compilations, but instead seeks to shine the spotlight on a selection on some of their lesser-known releases. We sincerely hope that this album will be enjoyed and appreciated by music lovers, unperturbed by notions of authenticity, and will convince some of the sceptics that the ‘Uptown’ sounds of Byron Lee are not only dynamic but truly top ranking”