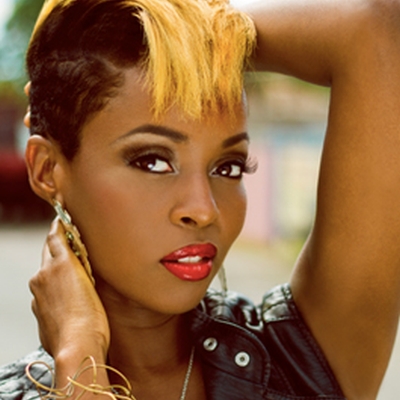 Haffi Come Back’ is currently the #1 song on the Jamaican Music Countdown Dancehall Charts.

The Jamaican music industry can be challenging for even the most talented artist, but one young lady who dares to be different and continues to prove that her talent cannot be put in a box is Dancehall-Soul singer/songwriter CHERINE.

With a voice that has seduced many on sultry reggae hits such as “Good Love’ and ‘Coming Over Tonight’; yet powerful and soul-stirring on socio-political chart toppers like ‘How We Living’ and ‘Kingston State of Mind’; Cherine has now boldly stepped into a unique position in dancehall scoring her first #1 dancehall hit with the sexy-in-your-face

‘Haffi Come Back’ is currently the #1 song on the Jamaican Music Countdown Dancehall Charts. On the Atlanta based International Top Rated Dancehall Countdown ‘Haffi Come Back’ moves three places up from number eight to secure this weeks #5 spot. The song is also #7 on Outaroad.com Hot Singles Charts and has already peaked at #1 on NMT Top 10 – which is syndicated on popular dancehall/reggae stations in Kenya.

The ‘Haffi Come Back’ video is climbing several video charts and is already within the top 10 of most popular local charts including CVM E-Strip Hitlist and Fiwi Choice Top 10 Charts. There is no denying the impact of the song on the streets, and it has also been added to DJ playlists both on mixtapes and radio and being played in all the popular parties.

The versatile songstress and her team have been on overdrive promoting the new singles across the island and recently completed a successful 44-city Cross Country Tour courtesy the RJR group. With production company DSP churning out new series ‘Ask Cherine’, ‘Cherine In The Streets’ and ‘Cherine Live’ via her web-based Cherine TV, fans and supporters are able to meet the artist – up close and personal.

According her manager, CEO of ZLink Entertainment, Patrick Lindsay ‘We are continuing to build brand Cherine through her hard work and respect for her versatile audience. She remains connected to her fans through her social media sites and most importantly by taking her music directly to the people.’