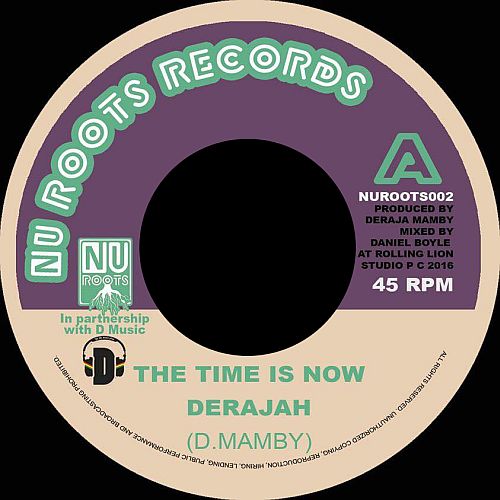 Jamaican singer Derajah recently won global reggae magazine United Reggae’s production competition with his song The Time Is Now, which has been mixed by UK’s Daniel Boyle and was just released on his D Music label, distributed by Nu-Roots. At the same time Derajah prepares for his second album –
The First Book.

Deraja has recorded since the early 2000’s, but got his big break when he started working with legendary guitarist
Earl “Chinna” Smith and his music collective Inna De Yard. His debut album Paris is Burning – released in 2011 – was however recorded with French band Donkey Jaw Bone along with a few Jamaican musicians.

Since the release of his debut, Derajah has worked on a number of projects, including his brand new song The Time is Now, which last year won United Reggae’s production competition and got mixed and dubbed by Grammy-nominated producer and mixing engineer Daniel Boyle, who has previously worked with artists such as Lee “Scratch” Perry, Max Romeo, Sylford Walker, Winston McAnuff, Oriel and Rosa Shanti.

“The song is wonderful and it was recorded by myself when I was struggling, so for me it’s a blessing to have the final mix and master ready,” says Derajah, and continues: “For me, The Time Is Now represents a fresh start and the message of the song is that the time is now. It’s time for prosperity, progress, goodness, greatness and redemption. It’s my time, your time and our time. It’s time for I man redemption.” The songs on the new album are produced by Derajah and recorded at his home in Kingston and in various domestic and international studios.

The Time is Now is available now on 7” and digital download with a dub version – Dub is Now – by Daniel Boyle. “Daniel Boyle mixed the song the way I had anticipated it. He is one of the best engineers I have worked with. It’s a work of art – the composition, the instruments, the vibes, the love, the tears and the joy,” says Derajah.

The artwork on the single was made by Jess Clarke, who wanted to put forward a mystical side.“I focused on the divine light, which illuminates the scene, and Derajah’s name. And blurred the side for the hourglass to illustrate the passing of time. The symbol below the title is the spiral of time, the infinite movement. Time is short, but it is eternal,” says Jess.

Derajah would like to thank Daniel Boyle, Anais Goasdoue, United Reggae team, The Viceroys, Daniel McCauley, Samory-I, Jah9, Debo Ras, all Inna De Yard team, fans and well-wishers in radio, print media and bloggers. “Big respect to Timothy “Quik Keys” Kahwa, great engineer! Before I leave, I must say big respect to my family, my wife and child for their continuous support and love. The time is now, give thanks.”

Keep up to date with latest news on Derajah Facebook page