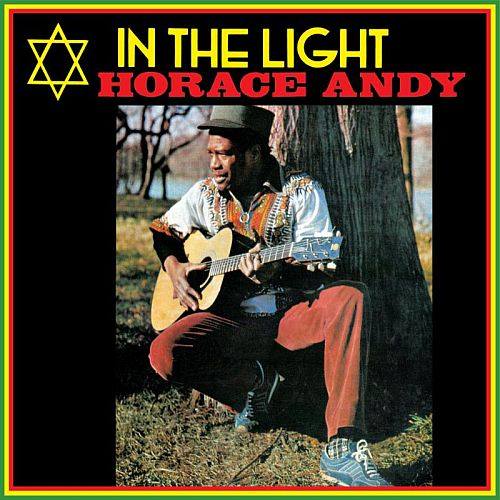 In The Light is rightly regraded as Horace Andy’s strongest testament.

Originally released in 1977 and given confirmed reggae album classic status by the 1995 Blood & Fire release.

“The majority of ‘In The Light’ was recorded in Kingston and featured a selection of new songs and updates of two old favourites, ‘Fever’ and ‘Problems’. Horace set ‘Problems’ over a new cut to ‘Mr Bassie’ which was later versioned by Augustus Pablo as ‘Pablo Meets Mr Bassie’ for his Rockers label.

Everton DaSilva not only enjoyed a close working relationship with Augustus Pablo but also with a number of other top Kingston session musicians many of whom are featured on this set. Their sterling contribution is highlighted on the accompanying dub album entitled, naturally enough, ‘In The Light Dub’ and simultaneously released as a separate album. Mixed by Lloyd James, while he was still Prince Jammy, at King Tubby’s Dromilly Avenue studio the set remains one of the handful of outstanding, if understated, dub albums of the seventies. Jammy’s mixing reveals higher heights and deeper depths to Horace Andy’s songs and is sufficiently sympathetic to allow the exemplary musicianship to stand proud.

Both albums were released in Kingston and New York on Everton DaSilva’s Hungry Town label but it was not until 1995 that these sets would finally reach a wider audience when Steve Barrow arranged a long overdue re-issue through his standards setting Blood & Fire organisation.” Excerpt from sleeve notes courtesy of Harry Wise

Horace Andy’s profile already legendary in reggae circles, has been internationally raised by his work with Massive Attack and his continued live presence, ‘In The Light’ captures Horace Andy at the very top of his game.
“In 1990 Horace was approached by the Bristol based musical collective Massive Attack and asked to contribute vocals to their ‘Blue Lines’ album which is now considered to be the first ‘trip hop’ long player. ‘Blue Lines’ sold well on its initial release the following year but has subsequently attained legendary status and an almost statutory high placing in the many ‘Best Album Ever’ polls.

‘Blue Lines’ established a relationship between Horace and the collective that has continued up to the present day and he is the only vocalist to have appeared on all five Massive Attack albums where he restructured ‘You Are My Angel’ and ‘Girl A Love You’ amongst a varied range of brand new material. Their studied, long term approach is in marked contrast to the working methods of many Jamaican producers that Horace had previously worked with.” Excerpt from sleeve notes courtesy of Harry Wise