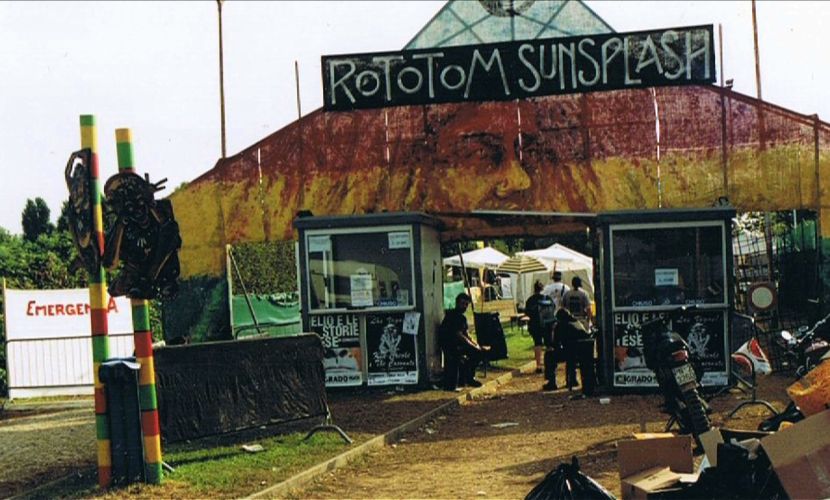 The Rototom association was born in 1991 out of a meeting between four people. Since then the entity has managed two nightclubs, hundreds of concerts, squatted an abandoned factory to create a cultural centre, organized marches for peace, and created the biggest reggae festival in the world, the Rototom Sunsplash that celebrated its twentieth edition in 2013. Rototom was born out of a challenge: to combine friendship and work, ethics and
projection.

From the beginning they faced many difficulties and had to struggle to keep the project alive. In the end they even had to leave Italy, emigrating to Spain. Today, 20 years on, Rototom explains its birth, the decisions that were made, the paths taken, the difficulties faced and the successes achieved, because the future is yet to be
built. The memories of the organizers, the people who knew the festival in Italy and many artists, are combined with the reflections of some of the biggest organizers of major Italian music events.

This all serves to build a story, influenced by individual and collective decisions, predominated by the Italian cultural and political scenes. More Than Twenty, eight 15 minute episodes The first club in Gaio di Spilimbergo, the nightclub in Zoppola, the Sunsplash in Latisana, the antiwar protest in Aviano, the new life in Benicassim, the Contest in Latin America, the future…

01. More Than Twenty, the story of Rototom in 8… by Rototom_Sunsplash

CHAPTER 1
The Rototom nightclub was born at the end of 1991 in Gaio di Spilimbergo (Porderone, FGV, Italy), a hall that would host all the alternative music of the time (from the Ramones to Sick of it all or CSI). Founded by four people, from the beginning it was a project that combined friendship and work. As Costantino, one of the protagonists, remembers it “the club was downstairs and we slept upstairs”. The club also became a reference point for those who were looking for an alternative life experience in this province in the North East of Italy.

It was also in Gaio, that the Rototom Sunsplash reggae festival was born in 1993. The images of today intermingle with those of the past. Together with the stories of the founders and the people of Spilimbergo we also find personal anecdotes of friends like the musician Michele Poletto, the musician and compositor Teho Teardo, the founder and director of Arezo Wave Festival Mauro Valenti and the musical group BTK. Location: Gaio di Spilimbergo, Pordenone, Spilimberg