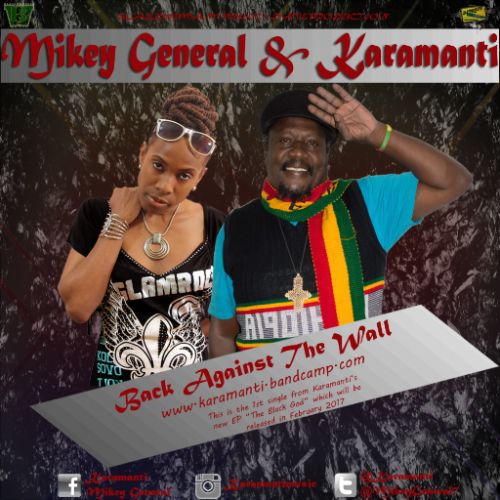 Dancehall artist Karamanti has joined forces with Reggae’s living legend, Mikey General, to send a powerful message to Africans at home and in the diaspora. The message is being sent in the form of a song entitled back against the wall.

On top of a roots reggae beat, both artists present some very serious concerns about the current state of the global Black community. They touch on a variety of things, including, but not limited to: religion, slavery, identity theft, division in the Black communities and that is just to name a few. The chorus, which is done by Mikey General ask: now that our back is against the wall, are we gonna beg are we gonna bawl? The song can be streamed and downloaded from https://karamanti.bandcamp.com

Back against the wall is the first single from Karamanti’s upcoming EP, THE BLACK GOD, which is scheduled to be out in February, 2017 on her own Blakkwuman22 Music. The rhythm was created by D’Ave Production and the song was mixed and mastered by ODB. All vocals were recorded at Mixing Lab Studios in Kingston, Jamaica by Snysh (who also did the backing vocals)