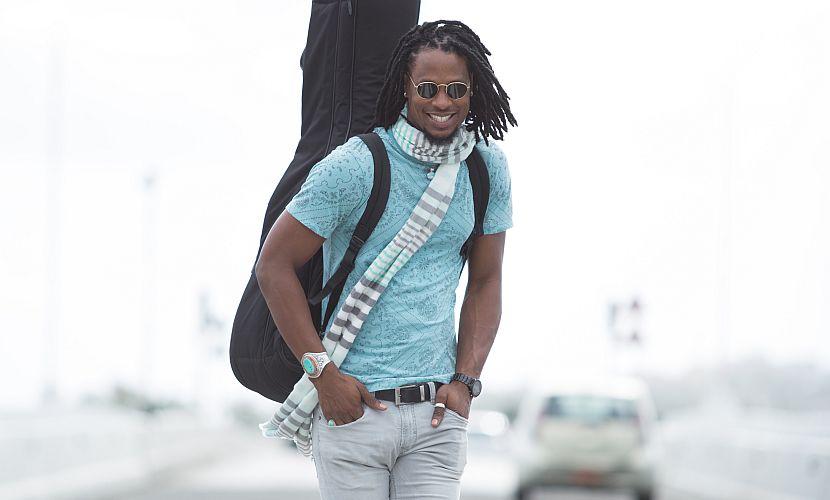 Son of celebrated Reggae singer, Bankie Banx and the first Anguillan to play Test cricket, Omari started his musical career when he retired from international cricket in 2012. He is now celebrating the success of his single ‘No Point To Prove’, featuring Peetah Morgan, promoting his album ‘Move On’ and touring Europe with Morgan Heritage.

You officially retired from a successful professional cricket career in January 2012 was it a hard decision to make?
It was not hard. I played professionally for 11 years and got to a point where I wanted to move on as my passion to wake up and get better everyday had dwindled.

Move On, your debut album, has been well received tell us more about making it. What was your inspiration?
My ‘Move On’ album was really me telling my life story and it was therapeutic now that I look back. My inspiration came from my challenges, triumphs and the places that I have travelled.

Of all the tracks, do you have a personal favourite from the album?
It’s hard to pick a favourite but I would say that ‘Somaiya’, a song I wrote for my daughter, definitely touches me as its such a personal song.

Do you write your own music or work with a team?
So far I’ve written and produced almost all of my material.

Who would you say have been your biggest musical influences?
My Dad Bankie Banx would be number one and other popular artiste such as Lauryn Hill, Stevie Wonder, John Mayer And Tupac are a few names I would say have inspired me in a big way.

Tell us more about working with Peter Morgan, how did that come about?
I’ve always admired Peetah Morgan as a artist/vocalist, I had written the song No Point to Prove and was thinking of it being a collaboration and a friend, close to the Morgan Heritage camp, suggested to me Peetah and I jump at the opportunity. Working with Peetah Morgan has been a blessing. His vibe and knowledge of his craft is amazing.

You have been supporting Reggae royalty Morgan Heritage on tour, how has that been?
That has been an awesome experience, Morgan Heritage have been around for over a decade and are still going strong. I think this is the perfect setting to watch, observe and grow as an artist. The crowds have been very receptive and I’m very proud of that.

How would you describe your live performance?
I would describe it as captivating and real.. I’m a musician artiste and I enjoy bringing that to the live stage. I play electric and acoustic guitar as part of my show. I sing from the heart and leave it all on the stage.

As well as the UK, you have recently been in Germany and France, how do you find the reggae scene there?
Germany has been great and France has been awesome.. Europe has been a blessing. Reggae music in Europe is well received and loved and we enjoy bring that vibe over. I look forward to coming back in the summer.

Do you enjoy touring or are you more of a homebody?
I love touring, I’m ready to move 🙂

You perform regularly at Moonsplash tell us more about the event.
Moonsplash is an annual event that has been going on for 25 years in Anguilla and the Producer is my father Bankie Banx. I have performed at the event from inception and have seen it grow into an international event which attracts people from all parts of the world. It’s a truly a spectacle to behold the vibe and energy is like no other.

What can your fans look forward to next?
My fans should look out for my new EP coming out early next year. It promises to be a step up from my debut album ‘Move On’.

Tickets are available for from all major ticket retailers including Ticket Master.

In 2013, Omari released his first album. His first major video, for the song called ‘Unafraid’

Never Played A 45 Macka B