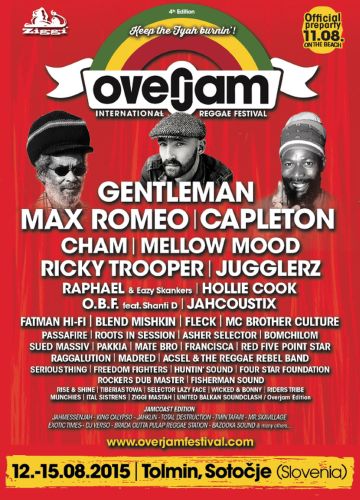 Cham and Ricky Trooper, among other fresh international artists have been confirmed for the 2015 edition, added to the already announced Gentleman, Max Romeo, Capleton and Mellow Mood

The Overjam International Reggae Festival, that will happen in Tolmin from 12th to 15th of August 2015, presents the complete line up: at the already mentioned and more than blazoned Gentleman, Max Romeo, Capleton, Mellow Mood, OBF, Jugglerz, FatMan HiFi, Hollie Cook and Brother Culture, the organizers add real pieces of history and fresh names that belong to the world reggae dancehall panorama. The Jamaicans Cham and Ricky Trooper will be added to the already succulent festival line up, together with the Europeans Jahcoustix, Raphael, Fleck, Blend Mishkin, Roots in Session, Asher, Bomchilom, Pakkia and many others …

Cham, popular for having been described as the “pupil” of Damian Marley, that brought him to the massive with the hit single “Fighter”, is already known to the lovers of the reggae dancehall scene thanks to the big song “Ghetto Story”. Cham will conclude the Overjam main stage happening on Saturday, 15th. Ricky Trooper instead comes from the dawn of the legendary Killamanjaro Sound, and in 2015 he celebrates 40 years of career bringing in Europe the famous Sound Trooper. He’ll rock the dancehall in on Thursday, 13th.

Jahcoustix will be backed by the same band as Gentleman, the Evolution Band, to present to the festival audience the last album “Frequency”, sold in several thousands of copies all the world. While Raphael will open the show of Max Romeo on the 14th of August, backed by his historical band Eazy Skankers. The Raphael tour counts over 70 shows in 12 different countries per year.

But Overjam news are not finished. The festival confirms the Overjam 4 Kidz area, targeted to the families that want to bring their children to the festival without losing any moment of shared joy. The kids will be able to play and make different activities in a wonderful, big and shadowed dedicated area, in company of our tutors in 4 languages.

Overjam will give more services, starting from the audience transfers. It is confirmed, for the consecutive third year, the deal with the Slovenian Railways, that will apply a discount of 50% on the slovenian train ticket for every couple of persons that will reach the Most na Soči train station with the festival subscription already bought. Out of the stations there will be a private Overjam shuttle van, that will bring people directly to the festival.

The audience will be able to reach Tolmin by own vehicles and from this years also with the bus lines, with departures and arrivals from and to Milan, Bergamo, Brescia, Padova, Udine, Gorizia, Trieste and also from and to the train station of Villach (Austria) and from the airports of Venice and Treviso. A further possibility will be given from the car-pooling service, facilitated by the cooperation with important european dedicated websites, RoadSharing.com and Youtrip.it.

A further surpise is coming from the new partnership between Overjam Festival and the famous website Musicraiser, where the supporters can find in exclusivity several packages that include merchandise and many services.