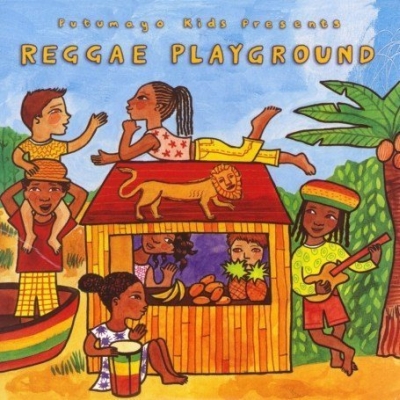 This CD Features upbeat songs from the Caribbean and around the world, Reggae playground is a jammin’ reggae party for the whole family.

This joyous new collection for kids and families from Putumayo Kids features a selection of tunes that reflect that crossover appeal and worldwide influence of reggae – a genre beloved all over the globe. As Jacob Edgar, Putumayo’s resident ethnomusicologist notes: “Reggae is one of the most adaptable and influential styles. People can really blend the reggae vibe with their local music to create something that is influenced by reggae but has its own unique flavour.” Reggae Playground will be packaged with a Putumayo Kids sampler featuring a track from each of the kid’s releases.

This album presents renowned artists from Jamaica. Judy Mowatt, a former backing vocalist for Bob Marley and respected solo artist, invites listeners to get moving with her rousing ‘Lets Dance’. We hear about the importance of respecting our differences and need to work together in Rita Marley’s classic anthem ‘Harambe’. The Jamaican reggae arrngements of ‘take me Home, country roads’ by the legendary Toots & the Maytals and the Burning Souls rendition of ‘ Here comes the sun’ demonstrate the adaptability of this infectious beat to almost any tune.

Other artists from diverse musical traditions who have adopted reggae and made it thier own are also featured on Reggae Playground. For example, Johnny Dread, an artist of Cuban Heritage who now lives in Miami, sings about ‘Rootsman Dread’, a colourful figure beloved by children. Marty Dread represents the huge popularity of reggae music in Hawaii, and Jessica, from the Indian Ocean island of Mauritius, displays the popular blending of traditional sega music with reggae.

The popularity of reggae in places as diverse as the USA (Eric Bibb), Brazil (Kal dos Santos), Morocco (Mousta Largo), and even Indonesia (Tony Q Rastafara) is also demonstrated here. Asheba, an artist from Trinidad and known for Caribbean songs for children, performs a soothing ‘Reggae Lullaby’ Even parents will be lulled by the refrains of ‘Oooh Baby don’t cry, rest now your weeping eye.’ “Reggae had a huge influence on my childhood days and shaped my musical career”, Asheba says. ” To me reggae is comfort food.”

To support the children of Jamaica, Putumayo World Music will donate a portion of the proceeds from the sale of Reggae Playground to the Jamaica Basic Schools Foundation, which helps fund early education for Jamaican children aged 3-6. Reggae Playground is the sixth release in the award winning Playground series from Putumayo Kids.