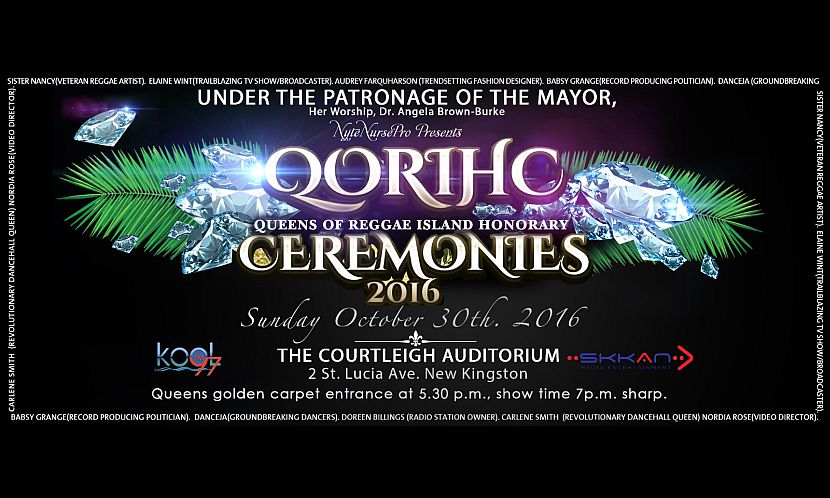 The highly anticipated ‘Queens of Reggae Island Honorary Ceremonies – QORIHC – set for October 30 2016, will see proceeds of the event going towards assisting the various charities of the Gregory Isaacs foundation.

The Foundation, which was established in 2010 to continue the charity work already started by the Cool Ruler – Gregory Issacs while he was alive, has successfully supported various initiatives at locations that require that assistance.

Locations include; the St. Barnabas Basic School in Fletchers Land, Walkers Place of Safety on Lyndhurst Road, the Black Harmony Basic School in Spanish Town as well as general support to the National Council on Drug Abuse in Jamaica.

The decision to support the foundation through part proceeds of QORIHC was a simple one, the CEO of the event, Mye Laurell, had covered Issacs’ infamous ‘Night Nurse’ single with the permission of June Issacs, Gregory’s widow and Colln Leslie, Chairman of the Foundation. Through this interaction Mye got to see firsthand the work the foundation was doing and wanted to assist not only with musical tributes but with actual monetary contributions.

“ I’m all for supporting great initiatives and the Gregory Issacs Foundation has done so much since its inception and will be doing so much more that I had to be a part of that” Mye Laurell, CEO of NyteNursePro, coordinators of QORIHC, shared

The Gregory Isaacs foundation is also in full support of the QORIHC event concept of honoring women in Jamaican Culture and Entertainment Arts sectors as an annual initiative.

“This is a fantastic idea and the first of its kind so the Gregory Isaacs foundation had to support QORIHC. It’s also a special month for us as we are celebrating Gregory’s Order Of Distinction which was accepted by his widow on Heroes Day in Kingston. In London, where he spend a bit of time prior to his death, he has been honored with a Blue Plaque as well” Colin Leslie, Chairman of the Gregory Issacs Foundation explained

“The 2016 ceremony will be held on October 30 at the Courtleigh Auditorium and is hosted by veteran broadcaster Francois St Juste, QORIRC is proudly under the patronage of the Mayor of Kingston Councillor Dr. Angela Brown Burke. The event will see a slew of appearances including a special performance from Reggae Crooner Duane Stephenson and a special tribute to Reggae pioneer Rita Marley.