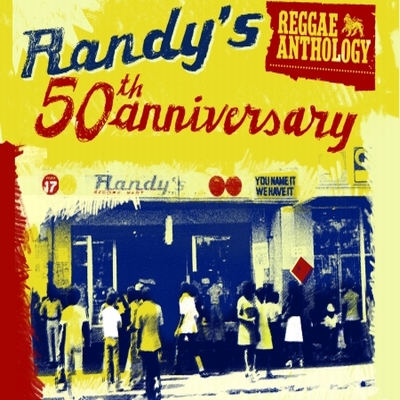 Randy’s Records the former Kingston-based retail shop and studio, which eventually grew into the world’s leading reggae label VP Records, is this year marking it’s 50 years in the business.

To celebrate the independent label is releasing a 2 CD/DVD collection (in stores late October 2008), Reggae Anthology: Randy’s 50th Anniversary, bringing together 50 of the studio’s greatest productions featuring musical icons like Bob Marley, Peter Tosh, The Skatalites and Dennis Brown. Extended liner notes provided by esteemed historians Steve Barrow and David Katz and a complementary 40-minute DVD loaded with interviews and images, delivers an in-depth audio/visual experience on the birth of reggae during what is arguably its most creative period.

Not many independent record labels can boast such a fascinating and colourful history as VP Records; nor have many been so fundamental in the global recognition of one particular genre of music. Its founder, the legendary Vincent “Randy” Chin was one of reggae’s pivotal producers and recording executives.

With some discarded stock of American rhythm and blues 45s cleared from jukeboxes, Vincent opened Randy’s Records in 1958. In 1962 Vincent and his wife Patricia, established a recording studio went on to open larger premises 17 North Parade right in the heart of Kingston. In 1968, the Chins would play a more integral part in the development of reggae, when the established a recording studio above the shop.

Studio 17 is said to have been a place where some of reggae’s finest moments were captured. Many of today’s legends made their mark at this historic location Lee (scratch) Perry cut dozens of tracks with Bob Marley and the Wailers at Randy’s including parts of the ground-breaking album Catch A Fire. Pete Tosh Gregory Isaacs and The Skatalites were regular visitors and American Johnny Nash also recorded there.

Randy’s Records’ own first major hit however was in 1962 with classic “Independent Jamaica” written and performed by Lord Creator and produced by Vincent Chin. It was recorded in honor of the island’s August 6 independence from Britain, and was to be the first UK release for Chris Blacwkell’s fledgling Island Records imprint.

Over 50 years later, this little shop on the corner of a street in Kingston has evolved into the internationally known VP Records. Based in New York, it was founded by Vincent and Patricia, who alongside their sons Chris, Clive and Randy, built VP to become the worlds largest independent reggae music label in the world. Vincent ‘Randy’ Chin died in 2003, but his wife, Pat and children still continue to maintain his legacy.

From ska to reggae, to dub to Jamaica’s leading singers, Reggae Anthology: Randy’s 50th Anniversary is a history of reggae culture from its beginnings in the 1960s to perhaps its most ingenious peak in the 1970’s. This commemorative release puts these influential music-makers in their proper place, the hands of reggae collectors and music fans everywhere.