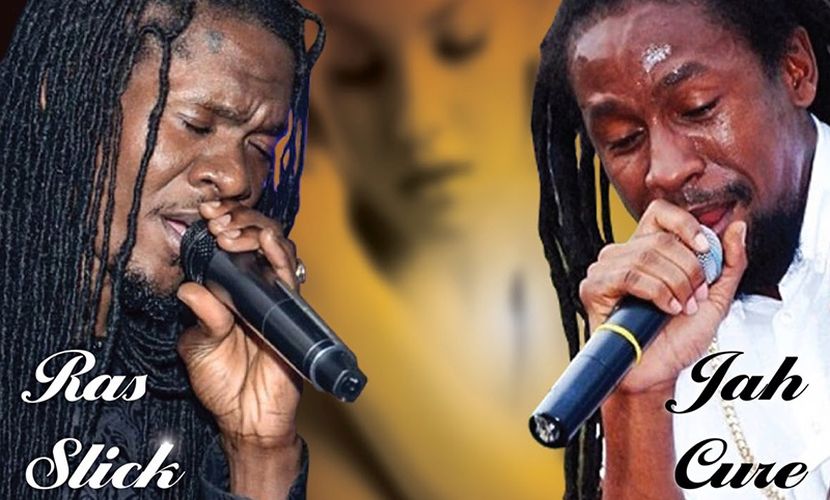 When the likes of two dynamic Reggae vocalists join forces, the only possible result is music magic. And true to form, the incredibly sultry “HOLD ON ME” soars beyond our wildest imagination, positioning itself to heat up the Summer! Better yet, the love-driven tune will warm our hearts for the rest of the year and beyond. Released on Tuesday, June 2 on iTunes, “HOLD ON ME,” has already garnered a huge buzz alone from it’s early promo and heavily circulated audio snippets.

The perfect harmony and well crafted verses would lead you to believe that this is not Ras Slick and Jah Cure’s first duet. But low and behold, it’s their very first time recording together. However, in the business of making music, musical chemistry is just that, musical chemistry. There is no denying the beautiful blend on the song, actually a remix of Ras Slick’s “Toll on Me,” which appeared on his acclaimed “HELP” EP earlier this year. Nestled neatly over a riveting one drop “riddim,” “HOLD ON ME” declares the grip that their significant other’s love has on their heart, mind and soul. Jah Cure’s intense and powerful vocals combined with Ras Slick’s crystal clear singing style truly make “HOLD ON ME” a force to be reckoned with.

“I was extremely humbled and honored to do a song with International recording artist Jah Cure…I rate his incredible style and massive music catalogue to the max,” says Ras Slick.

“Not everyone is afforded such an opportunity, so I decided to maximize it. One would have never thought that an impromptu meeting in Jamaica would lead to ‘HOLD ON ME’…this is a love song, straight from the heart,” the singer adds.

The chart-topping Jah Cure has been enchanting us with his unprecedented sound since the late 90’s. His infinite hits, including “Longing For,” “Reflection,” “From My Heart,” “Unconditional Love” and more, have helped define Reggae music as we know it. Jah Cure’s undeniable appeal has afforded him unforgettable collaborations with the likes of Rick Ross, Phyllisia, Jazmine Sullivan and more and garnered mainstream exposure. Jah Cure has also recorded with what reads like a who’s who of the Reggae industry, including Mavado and memorable collabos with Sizzla like “Divide and Rule” and “King of This Jungle.” The phenomenal Jah Cure maintains his commitment to Reggae music, as clearly evidenced on “HOLD ON ME.” The chart-topping singer is currently prepping for his highly anticipated new album, which is due o ut this summer.

Ras Slick may be a newcomer to the U.S. (just 4 years), but he is no stranger to Reggae music. Billed as an all-round Reggae entertainer, Ras Slick’s love of music has been visible all of his life. Inevitably, landing an entertainment management position with RIU hotels in Jamaica further honed his music connection. Ras Slick’s dreams of becoming a Reggae superstar are unfolding right before his eyes. From prime media attention and placements, to buzz-worthy music releases, high profile performances and his very own boat ride on Washington, D.C. Spirit Cruises (Reggae Rocks Potomac), Ras Slick is making moves. Without question, the release of “HOLD ON ME” with Jah Cure further solidifies Ras Slick’s music making mission.

To keep up with everything Ras Slick, visit:
http://www.rasslickmovement.com