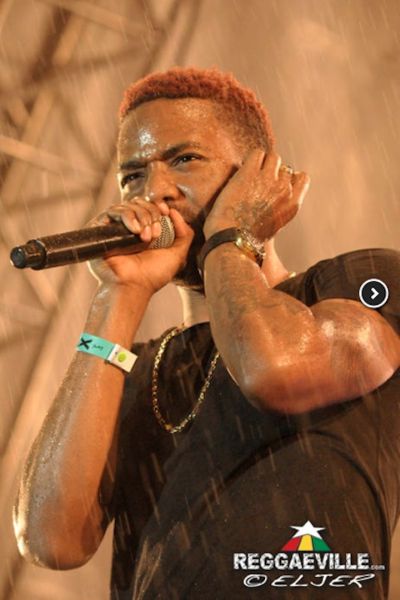 International dancehall/reggae star Konshens was forced to cancel the remainder of his current European tour as doctors have diagnosed the young star with having ‘chronic laryngitis’.

Konshens have been touring non-stop for the past year, stemming from a US tour which ended in Connecticut before embarking on a 3 week run in France and the African south appearing in Mauritius island, Mayotte and Reunion island, where he further went on to join his band in Europe to kick off his official European tour at the Musa Festival in Portugal. The effects of a rigorous regiment of continued back to back performances took a toll on his voice after delivering a stellar performance at the Summer Jam Festival in front of thousands of fans in the rain. The artist was forced to see a specialist in Vienna Austria who diagnosed him with ‘chronic laryngitis’.

The doctors in Vienna prescribed a list of medication and most importantly two (2) weeks of serious rest. However, after canceling just one show on the tour, the music lover was back on stage, performing at several other shows before his voice finally gave in while onstage in Zurich where the artist not only lost his voice but could also hear nothing through his left ear, and was forced to visit a second specialist in Frankfurt Germany where he was advised that if he continued then his condition could grow to become more damaging to his voice and hearing with the possibility of becoming permanently impaired.

Konshens and his management team had no choice but to reluctantly cancel the remainder of the tour, the disappointed superstar stated that “I’ve never had a reputation of canceling shows and I always want to keep it that way but it’s clear this could not be avoided. I really want to apologize to my fans in cities cancelled and I can assure you these cities are top priorities for next year… Gonna try this rest concept for once in life, I’m sure I’ll bounce back”.

Long time friend and manager for Konshens, Miguel ‘kitten’ Noble stated ‘
this is an unfortunate situation especially for the fans but we must take into consideration the safety of the artist and the importance of his voice,very unfortunate situation but at this point we must do what is necessary to regain his vocals and take the necessary steps to prevent this from re-occuring’.

Konshens, though very disappointed, went on to express gratitude and appreciation not only for his fans but also his supporting cast on tour, and also an apology to the promoters of the cancelled shows,”the People have been really enjoying the shows simply because they really love the songs and are true fans and we also act and interact with them and try to not focus on my voice challenges, the support from DBlueprint, Javada and Mark Hize has been the reason we even made it this far, added with our amazing tour manager KUBA but musically it was hell and I felt like I was robbing people at the shows…. Really not worth it to think I could possibly lose my voice permanently too. My apologies also to the promoters who’s shows had to be cancelled, my team will work non stop to ensure that we find some sort of agreement in dealing with this situation. Thanks again to all the fans, my team and BUXNA BOOKING AGENCY for partnering with us to put on a great tour”.

Konshens sophomore worldwide solo album titled ‘The Hotel Room’ is set for a September release; an album much anticipated by his fans. His single ‘Don Daddy’ on the Shane Brown produced ‘Greatest Creation’ riddim have been doing well on the airwaves, vastly picking growing in popularity locally and internationally. Konshens is set to return to Jamaica within the next week, where in will begin is recuperation process.

His sophomore solo album titled ‘The Hotel Room’ schedule to release this summer, will give fans and music lovers across the world the opportunity to hear his growth, his creativity and his passion for music and his fans. The release of the new ‘Konshens App’ is also set for this summer; he mentioned that fans will love this new app as the primary concept behind its design is ‘ease of access’, he stated that ‘the best apps I use are the ones that are user friendly and easy to navigate through, this is why we focused on ease of access, this will make the app less complicated and fun for fans to use’.