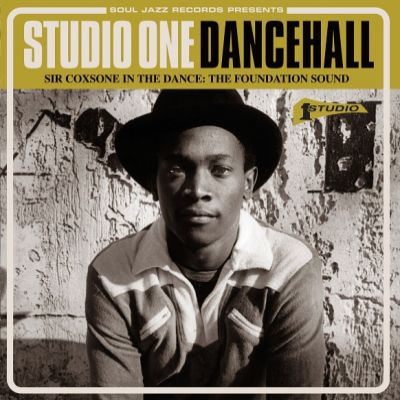 Featured here is a new collection spanning Studio One’s dancehall period – singers and deejays on classic Studio One rhythms, studio and electronic wizadry from the Brentford Road headquarters, lots of rare 12” singles, all effortlessly brought together to nice up the dance.

When Clement ‘Sir Coxsone’ Dodd first ruled the dancehalls of Kingston in the 1950s, fighting off the soundsystem competition of Duke Reid, King Edwards and others, few could imagine how far the reign of Studio One would last. But the emergence of ‘Dancehall’ as a distinct style of reggae at the end of the 1970s, as upstart competing producers began recording vocalists and deejays performing over replayed classic Studio One rhythms, in many ways made the influence of Clement Dodd’s vision more omnipotent than ever before (and lasting to this day).

Not surprisingly, Clement Dodd’s creativity and business acumen made him quick to respond to this musical phenomenon – and he soon began voicing the new stable of Studio One singers and deejays, such as Sugar Minott and Lone Ranger, over original classic Studio One rhythms recorded in the late 1960s – to produce some of the most innovative, time-bending and creative music of his career.

This album comes as CD with slipcase, super-loud, super-heavy triple vinyl album with free download code and as a digital download.